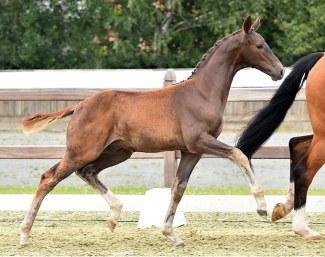 The liver chestnut colt Don Royal became the most expensive foal of the 2020 Oldenburg Elite Foal Auction which was held online and concluded on 29 August 2020.

The second most expensive foal was the filly Zypriana (by Zackerey x Florencio x Lord Liberty G), which fetched 27,000 euro and will stay in Germany.

Swiss clients purchased three jumper foals, the most expensive one being Come Together (by Comme Il Faut) for 14,000 euro.