Re-Training the Dressage Horse: To Recognize Problems and Work On Them 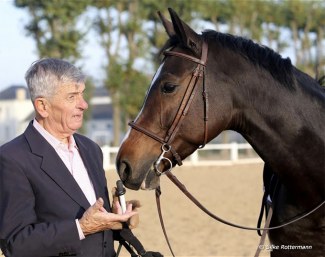 The displeasure to work could be easily detected in Milady’s face and had been the challenge for Christian Carde, former chief rider of the Cadre Noir, to start working with the mare. After half a year he’s delighted to see first positive tendencies.

The „father“ of German equitation, Gustav Steinbrecht, once said analogously that somebody can only became a master of equitation if he finds pleasure in difficulties. I think Steinbrecht wanted to express that only difficulties and to successfully master them initiate progress in a rider who then has collected valuable experiences. After almost seven decades which I have spent daily in the saddle, I have faced the most different problems, but in the end the problem always goes back to the same basic problem: to develop the personality and quality of a horse. This means that during the training of the horse we have to better and better realize from where problems which we face descend from.

The majority comes from a lack of activity and lightness of the contact as well as the insufficient balance that results from it. Without these elements real collection is impossible. And collection, although in different degrees, is the most important goal of any kind of riding if one wants to keep the horse healthy.

After 15 common years I sent my 19-year-old Westfalian gelding Junker in his well deserved retirement in the field, but soon I noticed how much I missed riding in every sense so that I began looking for a reliable horse. Luck would have it that there was a 12-year-old Oldenburger mare in the stables of the cavalry school in Saumur whose owner I had occasionally given one or the other advice. Because she had the opinion that the potential of this mare by dressage sire De Niro had been exhausted, I was able to buy Milady in spring 2016.

Because I had sometimes worked her in hand before and watched when being ridden, I was aware she would not immediately be a pleasure to ride, but be a challenge for the next time. It was apparent that the mare had little will to go forward and not much enthusiasm for the work under the saddle. For me it was important to find out the reason for it and not to be wrong on my judgement so that I could choose the suitable method to improve the situation with which numerous riders are confronted.

Milady’s problems at the beginning of our partnership in April 2016 had been:

a) The lack of eagerness: The mare did not want to go forward. It was important to find out if it was her nature, if it was the result of her previous training which caused her to loose motivation or if there was a more serious health problem.

b) The unsteady hard contact: It already became apparent when working the mare in hand that she had no respect to the rider’s hand. Instead of accepting the contact and yield, she pushed also under the saddle and tried to determine the intensity of the contact.

c) The crookedness: Although Milady had been an advanced dressage horse which had been started up to medium level, she had a significant lack of straightness at the beginning of our cooperation. This became clearly apparent on the right lead where the longitudinal flexion was very difficult. At the beginning it was simply impossible to ride a small circle on the right lead.

d) Little degree of collection: The mare had been forced into the contact by the double-bridle for many years and had been ridden forwards with the help of spurs. As a result her contact was too strong and the activity of the hind-legs poor. There was almost no authentic collection and she was going just a bit faster working tempo in the gaits. True collection comes from diligent forward going and a lightness of contact, so these were the two main things which needed to be worked on to improve the situation.

e) The constitution: Milady is a pretty petite mare of 165 cm height which did not have very pronounced back and tummy muscles when we started to work together and which needed to be developed.

Due to Milady’s weak musculature I split each working unit into three phases which followed the goals in a complementary way and should prevent to tire the mare physically during this point of time in her retraining.

The first 10-15 minutes of a training unit are lunging on a circle. I use the buckling of the lunge General Decarpentry recommends in his reference manual „Academic Equitation“. For me the lunging is an opportunity to observe my horse every day. I get valuable indications if there is progress, for example regarding the straightening. Apart from that the lunging prepares the riding: It is my goal that Milady takes the contact on both leads, in walk and trot, in a round frame and stretches forwards-downwards.

I ride my mare 20-25 minutes each day. Milady should learn to go diligently forwards and truly yield, so I ride her since the beginning of our partnership only in a snaffle and without spurs. Although my horse has warmed up and took a contact already during the lunging, I ride another 5 minutes free walk and trot at the beginning of this phase. With given reins she should go forward because you only get the correct contact out of a diligent forward motion.

If I have achieved it in walk and trot, I begin to ride the mare onto the bit. The rest of this phase I entirely ride suppling exercises which I like to practice on a circle. It is the goal to supple the mare on both leads,

so I also ride lateral work in walk which animates her to cross front-legs and hind-legs and to bend on both leads. If she does this in a satisfying way, I promptly allow her to lengthen downwards. With the steady change between bending and stretching I achieve a bigger flexibility and prevent that muscles cramp.

At the beginning I had used the handwork to animate Milady to yield correctly, to show her the way down and to increase her flexibility with the help of different lateral movements. Because this is now working quite well under the saddle, I use hand-work to prepare higher collection. The mare has started with half steps in preparation of the piaffe. Depending on the purpose of handwork I use either the snaffle bridle or a cavesson.

The Journey Is The Reward

The problems which I mentioned can only be eliminated by systematic work to help the horse into a better balance and to get a comfortable riding horse. But one has to be aware that the retraining of a horse is an attempt with a sometimes open end. At the point in time I am writing this article, Milady and I have worked together for about 6 months and there are positive tendencies in all mentioned spheres. Musculature, contact, straightness and balance have improved. But even more important it seems that the mare seems to get more and more pleasure to work.

Her nature is significantly friendlier and she is much more approachable also in the stable.

For me the work with Milady is fascinating and also touches me emotionally because it shows that correct training does not only make horses physically stronger, but also gives them self-confidence and brings back joy in life.