Jan Toenjes: "We Need New Scores for the Bundeschampionate" 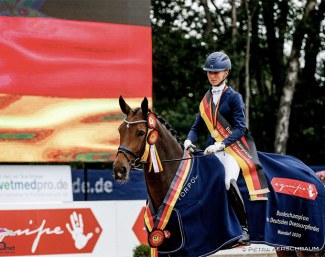 Guest columnist of the week is Jan Toenjes, editor-in-chief at ST.GEORG, a specialised German publication on equestrian sport.

We Need New Scores for the Bundeschampionate

The starting fields for the dressage horse tests at the Bundeschampionate are overflowing. And the judges put many starters in the same place. They can't help it because we need different scores.

It is probably an honour to be invited to the Bundeschampionate as a judge. It's a job which carries a lot of responsibility. Certainly every judge's mark, including those in an E-dressage or an A-style jumping course, should be well-thought through, but the judges who officiate in Warendorf are trendsetters. What they find good or what they rate well sets standards. By the way, the scores also have a double purpose and marketing message. Stallions become highly used breeding, championship finalists increase in value. At least in dressage. In jumping one is satisfied just with the quality label of “having qualified”. It says something about the jumping horse. Its peak performance is still relatively far away and not in Warendorf. At the CHIO Aachen it doesn't matter whether a horse got a 9.2 as a five-year-old. However, a 9 in a dressage horse test with a lot of spectators, atmosphere, and hustle and bustle is closer to real ity of a future dressage athlete.

In the finals of the 6-year-old dressage horses, for example, there were three 8th placed, three 11th placed, two 14th placed and two 17th placed. In the 5-year-old finals there were two 4th placed, two 6th, two 8th and six 10th! Placing them apart was easy at the front, also because the favourites for the medals gave the judges a few problems that were helpful in separating the field.

Dressage Horse Tests While There is Still Daylight

The participants' fields of the five and six year old dressage horses are the largest. A counter canter and a turn on the haunches do really not make the difference in the quality of the horse. In the qualifications up and down the country the score 8 is given for, meaning "qualified". As a result 49 six -year-olds and a whopping 76 five-year-olds competed in Warendorf. Can it be a bit more? Please not!

Not to be misunderstood. It's not about minimizing the performance of those who made it to Warendorf. Many just enjoy the trip to Münsterland. The green corn fields around the grounds of the DOKR headquarters are to many what the palm tree in front of a hotel on Mallorca is: an unmistakable sign that the annual holiday has begun. One likes to have constants in life. However, others experience a special Warendorf: qualified for the first time, possibly with one's own breeding product or on a horse trained completely by oneself. That’s something special.

And it is precisely these moments that deserve particularly good judging. No, this is not a bashing of the judges. But on the show grounds of the Corona Bundeschampionate, which is relieved from spectators, you hear snippets of conversation even more often than usual - not behinds masks, but at a distance, of course. The tenor: "THEY did it again". People with competition experience know it means that "the judges" have given a fourth rider a score of 8.3.

They are right to wonder whether it is not possible to differentiate more. But wait! How should one differentiate with the available tools?

That's Why We Need Different Scores

As a reminder: The judges are only allowed to give full or half marks. This was once decided. Experience, not only at this Bundeschampionate, shows that this is not enough. Let's look at an example: a horse trots expressively, loosely, over the back, the rhythm is maintained even on curved lines. On the left, however, a little less well than on the right. In this trot tour there are moments for a 9.0, also some for an 8.0. The very good ones (9.0) predominate, but the moments on the right hand are also there. It feels like an 8.7 for the judges - almost "very good". Nearly. With the current rating system, the only option left is 8.5. The judges probably only have a partially good feeling about that. Especially when they know that three rides previously they had an 8.3 trot candidate but had to give it an 8,5 as well.

There will always be discussions about the judges' decisions. Taste, politics, incompetence ... Well-known arguments in these conversations. The existing rule is sufficient for the qualification tests, but in the final the quality of horses becomes so concentrated. There must be other ways of judging.

Certainly there would also be a discussion when judges are given the entire scoring scale. Surely someone will wonder whether the 8.6 for the trot of the horse that went at 9.22am ride didn't look more like the 8.4 of the 5.43pm ride.

We should get ourselves in these discussions for once, for my part on a trial basis in the beginning. All active four- and two-legged friends deserved it.

- by Jan Toenjes for ST.GEORG