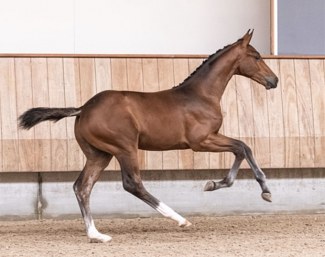 The show jumping bred Phedra became the best selling foal in the fourth KWPN Online Foal Auction of 2020. The top selling dressage foal was Pagani Suthempe, which will move to Spain.

Especially the show jumping bred foals did very well in this auction with Phedra (by Tangelo van de Zuuthoeve) selling for 22,000 euro to a Greek buyer.

The second most expensive foal of the auction was Pardi (by Apardi) which sold for 8,000 euro to a Dutch client.

The most expensive dressage foal was Pagani Suthempe (by Kardieno x Florencio) which sold to Spain for just 5,000 euro.

Piquet (by Taminiau x Tango) stays in Holland for 4,750 euro, while the chestnut coloured Put it in Writing SSS (by Ferguson x Jazz) sold for 4,500 euro.