European Equestrian Federation Wants 2021 European Championships Back on the Calendar 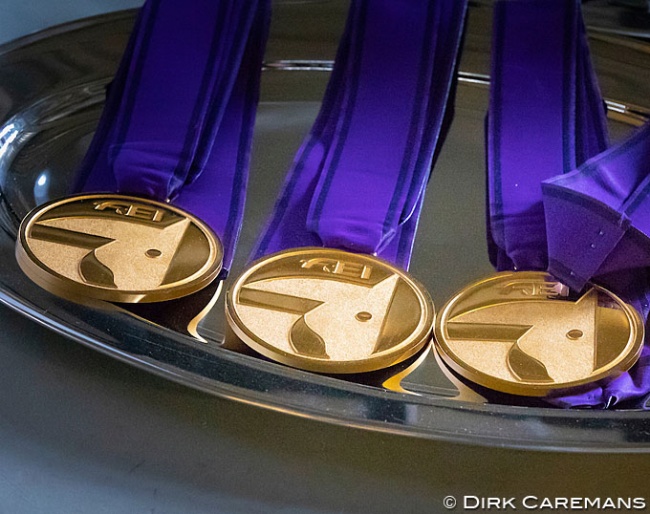 In their newsletter, the European Equestrian Federation urges the FEI to re-instate the 2021 European Championships back on the show calendar.

Due to ongoing uncertainties of competitions due to Covid 19, the EEF finds it important that a continental championship will be able to take place in 2021 even if the postponed Olympics happen.

Budapest was allocated to host the European Championships in the Olympic and Paralympic disciplines of Jumping, Eventing, Dressage and Para Dressage from 23 August to 5 September 2021. However, the proximity of the Championships to the rescheduled Olympic and Paralympic Games has meant that it is no longer feasible to run Jumping, Dressage and Para Dressage

Theo Ploegmakers, the president of the EEF, addressed the EEF members as following:

The year 2020 will go down in history as the year when the Covid-19 pandemic has put our society in a semi lock-down at a global scale and within that context the Equestrian sport industry came almost to a complete stand still. Organised sport has never seen anything like this. The longest general suspension of live events, in countries across the globe - in peacetime. The ultimate mega event, the Olympic Games, was rescheduled to 2021 and in Equestrianism many European Championships were initially postponed and eventually canceled. But the sport has reacted, reorganized and resumed even though in strongly adapted economies and societies. Contests were held behind locked doors and organizations worked remotely, struggling to stay financially solvent.

The international Equestrian community and the FEI as its governing body has been able to manage all these challenges with adequate intervention, although there will always be voices to claim that it could and should have been done differently.

Now what? The extraordinary events of 2020 and the still uncertain path of the Covid-19 pandemic have made it almost impossible to make definitive plans for the future. Especially with vaccines and treatments still unclear. Will the Equestrian sport see more or less a normal year, or will the sport be interrupted also in 2021 by numerous uncertainties? What do we need to change when coming back? What do we need to improve? We cannot answer these questions from where we stand today. In order to know what will be possible in 2021, we need to have a clearer view on many critical factors, including, among others, if the Olympic Games will go ahead as planned, if vaccines will be available, or if reliable Track and Trace systems will be in place. One feasible prediction though is that the economy will be under pressure and that revenues out of sponsorship, broadcast and the ticket-paying public will be even less granted as they were already before.

The “new normal” for Equestrian competitions?

The EEF has held, during the first months of the pandemic, video conferences with all its members and stakeholders to learn about their vision and the role they expect the EEF to play in the post-Covid period. Keeping scenarios in mind and ruling possibilities out as evidence accrues, that is how people try to cope with the current situation. Day by day, everybody tries to understand what the long-lasting implications of this health crisis are. Which is going to be the “new normal” for Equestrian competitions? Will horses be allowed to be transported across European borders?

We could perceive certain common points whilst holding the video conferences with all EEF members and stakeholders: many of them expect a change. The specific desired futures may differ, but many see an opportunity to alter the course of the Equestrian sport. Notably, many federations are of the opinion that the sport is best served, when concentrated on a continental level with the European Championships as the ultimate goal.

In light of the foregoing, the EEF is asking the FEI to remain fully prepared to hold the European Championships in 2021, should the circumstances allow. Even when the Olympic Games in Tokyo go ahead, the European Championship is for the vast majority of EEF Federations the most important event in 2021. While it is not customary to hold two major tournaments in a year, the EEF is calling on the FEI to make an exception for 2021, as the extraordinary circumstances we are going through require extraordinary measures.

Last but not least, a major outcome of our video conference series was about the future role of the EEF: It became clear to us that our members and stakeholders expect the EEF to play a much more decisive role, when it comes to European affairs. All in all, together with the National Federations, the EEF has arrived at a crossroads and its direction will have to be worked out in the time ahead.