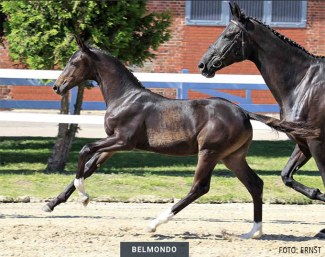 For the seventh time, the Hanoverian breed society held an online auction, this time with 30 selected foals. The highest price was achieved by Classy Art, who found a new owner for 16,000 euro.

The top priced foal is the jumper filly Classy Art (by Conthargos x Werther -breeder and exhibitor: Vetart), who is out of Wertherröschen, dam of the privately owned sire Stakkato Gold. Classy Art sold to a German buyer for 16,000  euro.

The most expensive dressage foal was Belmondo (by Bon Voyage x Sandro Hit), bred by Udo Hoppe. He moves to South Germany for 13,000 euro.

Barney S sold to a German for 7,500 euro. A Spanish customer had the highest bid of 7,000 euro on Vivaldo (by Valdiviani x Damon Hill)

The interest in the foals of the 7th Verden Online Auction was also very high internationally. About half of the foals will leave Germany: four will grow up in Great Britain, two each in France and Spain. One foal each was sold to customers from Switzerland, the United Arab Emirates, Austria and Ireland.

The average price for a foal in this auction was 7,333 euro.