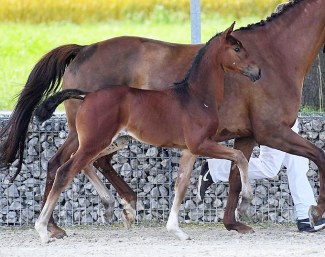 The not so originally named show jumping bred Chaclensky (by Chaccoon Blue x Corlensky) became the best selling foal at the 2020 DSP Next Chance foal auction held during the 2020 German Professional Dressage Riders Championships in Darmstadt, Germany, on Saturday 19 September 2020.

One foal had a higher bid, Dragonar (by Darco x Baloubet de Rouet), for whom the hammer struck at 14,500 euro but the owner, Julia Engel, bought her own foal back as it didn't meet the reserve price.

The best selling dressage foal was For Ever You (by For Romance II x Furst Piccolo), bred by Robert and Petra Knott. She sold for 10,000 euro.

The average price for a foal at this auction was 7,637 euro.