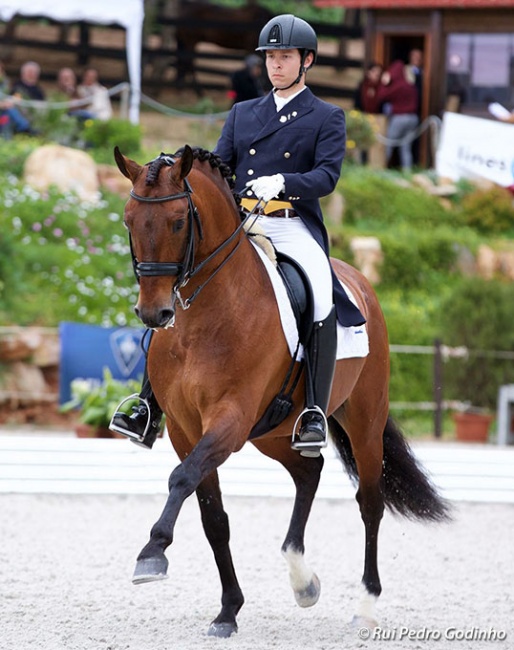 After losing the ride on his number one Grand Prix horse Aron de Massa in the spring of 2020, Oliva had no immediate Grand Prix level confirmed successor for a Tokyo run.

However, the tide has turned for him and the investment group JRME Horse Campline has acquired the 11-year old Lusitano stallion Escorial (by Spartacus x Edo RHE) from Coudelaria Luis Bastos and given the ride to Joao.

Bred by Coudelaria Santa Barbara, Escorial made his international show debut under Ricardo Reis at the 2018 CDU Alter do Chao at small tour level.

After a successful season at small tour level, the stallion was moved up to medium tour level in 2019, booking several victories at the CDI's hosted in Portugal, including the ones in Cascais and Abrantes.

This year Reis and Escorial campaigned at the home CDI's in Cascais and Beloura posting scores of 69%.

Sold in Portugal, to Ride for Brazil

Escorial has now been sold to the Portuguese company, JRME Horse Campline

JRME Horse Campline not only sees an international Grand Prix horse in Escorial, but also a valuable breeding stallion.

The 24-year old Joao, who is the son of the famous retired female Brazilian basketball player Hortencia Marcari who won silver at the 1996 Atlanta Olympic Games, will compete the horse.