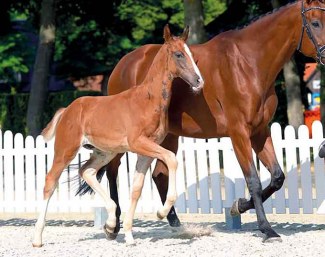 The colt Exceptional became the top selling of the first and only live foal auction which the  Westfalian Breed Society has held in the 2020 corona year.

The live auction took place during the 2020 German Amateur Championships and featured a small collection of 13 dressage and jumper foals. Ten of them sold to new owners.

The most expensive foal was Exceptional (by Escamillo x Vitalis), bred by Bernd Börger, which sold for 23,500 euro

All ten foals sold to German customers. Sagenhaft (by Sir Donnerhall x Ampere) was the second most expensive foal of the auction, selling for 17,000 euro.