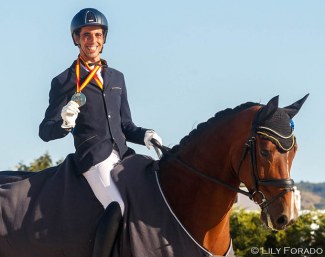 Claudio Castilla, Juan Francisco Fernández and the students of Juan Antonio Jiménez - Carlos Bayo and Alejandro Oliva - came home with several medals hanging round their necks. The level presented was stratospheric with a large collection of 80% scoring horses, but not the domestic PRE but the European warmbloods once again dominated.

The 4-year old category wais the one with the most unpredictable outcome. New faces and new horses that are the near future of Spanish Dressage were competing in the class. Their inexperience in the ring combined with the skills and "savoir faire" of the riders is a perfect mix for the sport.

Carlos Bayo and Let it go (by Tiesto) were a league of their own finishing at the top of the leader board far ahead of all competition. The student of Juan Antonio Jiménez set the rhythm with a solid 84.400% in the first round.  In the final ride, 82,407% was his golden score.

Juan Antonio Jiménez' team returned home with several medals. In this category they did not only take gold, but also silver. Alejandro Oliva and the Eye Catcher son, Lance, did not disappoint. 80,600% and  81,200% were his silver scores.

With a tiny difference of few one hundredths, Juan Francisco Fernández and Fraggle Rock claimed the bronze. In both qualifications, this horse received the best score in walk.  From his fifth position (80,000%) in the preliminary test to third in the final (81,000%), this bronze medal was the rider's first medal out of three in this championship.

Alfonso Gormaz and Rockt It left the audience star struck. Their golden path in this championship was very easy. His supremacy in the 5-year old category was huge, unseating the second placed pair with a difference of 19 points (379.900%). Alfonso Gormaz and Rock it  (by Rock Amour) were the undefeated champions with three winning scores of 80,600%,87,000% and 84,400%

The Westfalian impressed with its quality of gaits, and particular the knee action. Last edition, they drew the attention, and this season they shone, finding a golden lining.

The 6-year-old category was the one with the highest level. The main favourites were Sansibar, Doñana TR, Nautilus and Quartar. The cards were on the table and each of them performed their tests at great level despite score oscillations from the judges. The second qualifier shook up the entire leader board.

Jose Antonio Garcia Mena and the Trakehner bred Nautilus (by Connery) collected bronze after winning the first qualifier with 81,200%, placing second with 83,800% in the second qualifier and fourth in the finals with 79,400%

Susana Vázquez with Sydney (80,100%) ended up fourth, while the PRE bred Neon de la Espada (by Lacayo XII),  ridden by Pedro Hernández Triviño, made the biggest climb on the ranking. They were 18th  (69,600%) after round two and captured fifth position (78,000%) in the finals.

In the 7-year old division Juan Francisco Muñoz and ballerina Betty Boob (by Bretton Woods) achieved the necessary scores to take home the gold and national title. The pair won the first round on 73,468%, was third in the second round with 74,775%, and second in the finals with 75,357%. Overall they had the highest score for gold.

Juan de Dios Ramirez  and the Hanoverian Quarlito Von Nymphenburg (by Quaterhall x Rotspon) came home with a bittersweet  silver medal. Closing the podium on the first round with 72,257%, they captured two first places in the following qualifiers but it was not enough to taste the gold (75,122% and 75,700%).

Juan Francisco Fernández Muñoz and Farron de Amtuna (by Foundation) finished on the bronze step of the podium with solid scores of 71,340%, 74,818%, and 72,843%. They added another medal to his big collection.

In the Developing Prix St Georges horse division for 8 and 9-year olds,  20 combinations lined up.

Spanish Olympic rider Claudio Castilla and the Hanoverian Lario de Adama de Susa (by Locksley II x Rotspon) earned the title for the third time. Lario already won gold as a 4-year old in 2015 and as a 7-year old in 2018.  Claudio and Lario won all three rounds with solid scores above seventy. The pair posted 73,906%, 72,892% and 75,320%.

Sergio Marti Perez and the Hanoverian mare Dilara (by ??) ended up with the bronze. They were in a strong third position in the first round 71,354%, but dropped to a 4th spot (68,333%)in the second round. In the Finals they returned to the bronze spot with 74,305%.  Their overall total put them third for bronze.