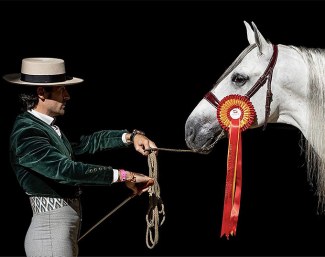 Arrabé was born with the horse gene, growing up amongst horses at his parent's breeding yard, Yeguada Domingo Arrabe.

Ruben's international show debut in 2012 at the CDI Toledo, where he competed Goloso D (by Empaque x Azucar VII). The horse is now owned by Brunei's Miriam al Khalifa.

His international small tour debut followed in 2015 at the CDI Jerez de la Frontera, aboard the Westfalian bred V.Laureus (by Laurens) and Westfalian Calindo GL (by Contifax). Arrabe mainly competed young horses and never went outside of Spain.

His most recent CDI start was in May 2019 in the 7-year old test with his in-laws' PRE stallion Toral RJ at the CDI Segovia.

Ruben was based in Villanueva De La Cañada near Madrid and was a highly professional and respected handler. He prepared PRE's for breed shows. Dressed in traditional attire, Arrabe brought the best out in his horses.

Although loved by his family and respected in the horse world, the talented rider and trainer was overwhelmed by life and decided to end it.

Ruben was supposed to compete at 2020 SICAB, the World PRE Breeding Championships, this week. On Monday morning, the shocking news brought great sadness to the event which celebrates Arrabe's passion, the PRE horse.

A special tribute was held at SICAB on Monday morning 13 October with riders, trainers and fans forming a circle in the main stadium for a minute of silence.

Related Links
American Dressage Rider Teresa Butta-Stanton Passed Away
Akihiro Shimoda Passed Away Unexpectedly
Holger Münstermann Passed Away
Adriane Alvord: "The Pain that Lives Behind the Barn Door"
Angelia Bean: "The Horse Business is Tough, But Those Words Don't Even Touch the Surface"