Laura J. Rasmussen Starts Sabbatical in the U.K. with Hattrick at 2020 CDI Keysoe 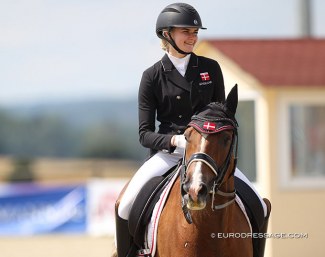 Danish Young Riders team member Laura Jarlkvist Rasmussen has begun a new chapter in her life with a triple victory at the 2020 CDI Keysoe on 9 - 11 October 2020, just three weeks after moving to the U.K. on a sabbatical to focus on her riding.

The 19-year old Rasmussen began her competition career in Denmark as a 12-year old pony rider in 2013.

Her pony partner in crime was the Danish sport pony bred Hedeman's Megare (by Chamberlain x Fadjec ox) with whom she made her international show debut in 2015 at the CDI Odense. She campaigned him through 2017, briefly riding him alongside pony Klepholms Skinfakse (by Kingsettle Solidus x Eldyr ox), before making the transition to junior level and horses. Laura and Megare were 9th at the 2016 Danish Pony Championships and 4th in 2017.

Laura's number one in the barn is Aatoftens Dornier, a now 16-year old Danish warmblood by De Noir x Rambo, which she premiered on the international stage at the 2018 CDI Wiener Neustadt. The pair got selected on the Danish team for the 2018 European Junior Riders Championships in Fontainebleau (FRA) and finished 32nd in the individual after winning team bronze.

In 2019 the pair campaigned ardently at Young Riders level for a team spot and competed at CDI's in Joosland, Aalborg, Uggerhalne, and Vilhelmsborg but were not selected. In 2020 the cards were dealt differently and Laura was back on the team for the European Young Riders Championships in Pilisjaszfalu (HUN), where they got again team bronze and placed 9th in the Kur to Music Finals.

For the past 9 years she has been training with Sanne Henningsen.

A New Chapter in the U.K.

After the European YR Championships, the 19-year old Laura decided on a sabbatical from school to dedicate a year to horses. She accepted a riding job at Linda Keenan's yard in Layham, Great Britain, under the tutelage of Danish Grand Prix rider Kenneth Dyrby.

"I got a really good offer from Linda and Kenneth and even that I thought it was very frightening to move so far from home, I could feel that this is the right place for me to learn more about horses, maybe in a different way than you would do it in Denmark," Laura told Eurodressage.

Laura's life has been revolved around horses with both her father and stepmom being high profile equine veterinarians in Denmark. Dad Jonas Rasmussen works at the prestigious Højgård equine clinic and is the former Danish dressage team veterinarian, while step mom Rikke Munk Andersen is a leading reproduction veterinarian. Mum Rikke Jarlkvist is a small pet vet at the Odense Animal Clinic.

When asked if Laura had no interest in pursuing a veterinary career herself, she replied: "Both my parents and my step mom are vets, but I have never wanted to go that way in life. I want to go back to school next year or the year after and I think I want to study psychology, but I am not sure yet."

Three weeks after her move to the U.K. Laura trailered to her first CDI on British soil, last week's indoor CDI Keysoe, where she achieved a hattrick, winning all three Young Riders classes.

"Dornier was very focused and gave me the greatest feeling in the area," she said/ "He had some difficulties, but I think we handled them really well this weekend and I am grateful for that."

"I think our partnership has started wonderfully," Laura added referring to Dyrby as her new coach.

Laura has also brought Zala Mi along to the U.K. and hopes to focus on both for 2021.

"Zala Mi has the greatest temperament. I hope to make her my new young rider horse as I wish to ride Under 25 on Dornier by the end of next year," she said.