Look Who's Back: Mister X 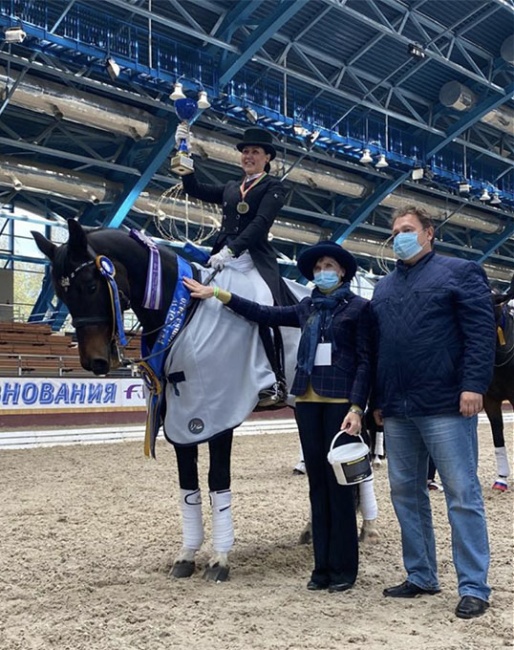 After a two-year absence from the international show ring, Russian Inessa Merkulova returned to the arena with her beloved top ride, the Russian Trakehner Mister X at the 2020 CDI-W Minsk in Belarus on 16 - 18 October 2020.

The now 16-year old Mister X (by Egeus x Blank) got sidelined for two years because of a hoof injury and missed out on the planned 2019 World Cup Finals and 2019 European Championships, as well as were out of the running for Tokyo team selection.

Merkulova commutes between her yard Ostehof in Bremervörde, Germany, and her stable in Moscow City, Russia.

The pair made its international show debut at small tour level in March 2013 at the CDI Zhahskiv in the Ukraine. Three months later Merkulova moved the 9-year old up to intenrational Grand Prix level at their home show in Moscow in June 2013.

Trained by retired Dutch 5* judge Ghislain Fouarge, Merkulova and Mister X did their last show in September 2018 in Moscow at the New Century riding club and won the Grand Prix and Kur. On transport the horse injured himself severely to his hoof and it took him two years to recover fully and return to the show arena.

"During transportation in December (2018) to the competition venue at Maxima Park, the horse was injured," Anatoly Merkulov told Eurodressage a year ago. "As a result, synovia formed in the hoof joint."

Merkulova's severe riding accident in January 2020, which left the 55-year old four weeks in an artificial coma to recover from multiple fractures and a bilateral pneumothorax, did not help a speedy return to the arena.

Mister X made his long awaited comeback in Belarus at the CDI-W Minsk last weekend, where they won both the Grand Prix and Kur to Music with 75.370% and 78.200%

See the video below