The Essential Guide to the Piaffe - Part II: Taking the Horse’s Individual Conformation into Account 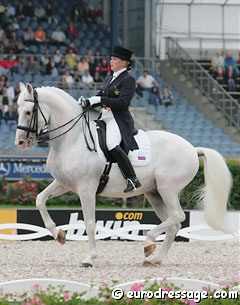 by Angelika Frömming for Eurodressage
This article is a continuation of The Essential Guide to the Piaffe - Part I: The Piaffe is a Means to an End

While the phenotype of the modern warmblood became increasingly uniform the past decades, there is no doubt that the conformation of a horse either helps the movement of piaffe or complicates it. This is a fact undisputed by trainers, judges and riders. The built of a horse can complicate the matter of defining a good piaffe as well as judging it, especially because the FEI rule-book does not take different conformations into consideration.

In his article published in St. Georg magazine in 1936, Ludwig Zeiner explained how conformation influenced the piaffe of the horse: “You cannot press every horse into a piaffe standard. Just as trot and canter or walk is different and individual for each horse, in the same way each horse has a different manner to piaffe. Everything is correct if the basic conditions of rhythm and impulsion are there and clear in a straight line."

At a meeting of the German Riders and Drivers Association in 1975, the question was asked if "there us a picture that precisely defines piaffes and passages in the outline as the only correct version". As a reply, the the late Richard Wätjen was quoted from his book Das Dressurreiten:  "With the piaffe, the conformation of the horse as well as the mechanics play a certain role. For example, the lifting of the front legs is partly dependent from a more or less angled and high trotting movement. Horses with high angled movement will raise their front legs more than those with the flatter action, which is the norm with thoroughbreds. That is why a piaffe, in which the front legs are not raised completely to the above-mentioned height, can be described as good, provided that the bending and lowering of the hind legs occur rhythmically with clear lifting of the hind legs in diagonal steps."

In 1978 Harry Boldt's book "Das Dressurpferd" was published. He said about the piaffe: "In horses with natural knee action, the diagonal forearm is ideally raised to the horizontal. In horses with flat (knee) action, the foreleg is usually so high in a good piaffe that the tip of the hoof of the raised front leg is approximately above the height of the middle of the cannon bone of the supporting front leg."

The warmblood in the first half of the 20th century and in particular the Trakehner, which was used across disciplines and especially as a riding horse, had a rather flat, but energy-saving movement that did not make it easy for the horses to show a piaffe that answered to the guidelines of the classical ideas. With regard to trotting movements and the piaffe, the thoroughbred fared the same. In contrast, the cuirassier cavalry horses showed a high knee action, but with little advance and less stamina, which in turn made it easier to do a piaffe. It was only the increasing crossing of breed-typical characteristics and thus the increased specialization in breeding that led to today's modern type of dressage horse.

At the beginning of the 1980s an article with the title "On the meaning of FEI dressage programs“ by Kurt Albrecht, former head of the Spanish Riding School, was published in the booklet Reiter + Fahrer (5/83). It describes the change in the relation between horse breeding and contemporary horse training: "Up until now, equestrian skills have played a dominant role in dressage riding, both in the demonstration and in training the partner horse, and consequently only in second place the horse material.  This role distribution has increasingly changed. (…) At the same type a certain type of horse was imperceptibly elevated to an idol. Horses, which did not equal this idea, could soon no longer compensate for even with the most brilliant riding."

Albrecht further mentioned: "If the aim was to achieve the best possible rideability of the horse, a competition was gradually raised to the test, in which the natural abilities of a horse are clearly dominant today."

Up until the 1990s there were repeated inquiries and discussions about the influence of the horse’s individual conformation on the execution of the piaffe.

At an FEI conference in Warendorf in October 1991, it was emphasized that the piaffe is considered ideal if it is shown on the spot. However, a forward impulse must be recognizable. The lower the croup is, the less the hind feet can be lifted. A lot of carrying power and almost no pushing power is required in the piaffe. The question of the extent to which conformation had to be taken into account remained open.

During a judges’ seminar in the same decade Paul Stecken, former trainer of Dr. Reiner and Ingrid Klimke, stressed the essential characteristics of a piaffe: Diagonal footfall, angled hindquarters, deeply lowered croup, if possible in place and straight. At the same time he mentioned the relation between the conformation and the possibilities of the angulation of the three angles of the hindquarters. These angles limit or enable the piaffe. He said that a good neck is important and a soft fetlock advantageous, also the musculature at and below the withers. The kidney region has to be lifted during executing a piaffe and is not allowed to 'sag' (so no bath tub backs). The lifted hock joint isn’t allowed to swing behind the supporting hock joint. Front legs, which are not straight, but backwards can lead to the horse leaning on them. A moment of suspension in the piaffe was „almost unnatural“ to Stecken.

During the seminar he differentiated between a piaffe as a preparation for levade (8 or better) and a piaffe for competition as a "passage in place" (mark only up to 7).

In a personal conversation in 1992, Willi Schultheis explained that the professional riders previously had the task of riding horses with weak natural angulation of the hindquarters. Today, when choosing horses, horses with more blood and better natural bend of the haunches are preferred. Christian Carde is convinced in his already quoted book, that "because the collection depends on the individual physique of our horse (..) it is therefore impossible to put all horses in the same drawer called collection.“

Judging for Quality, not for Error

At the 1994 FEI seminar in Weert, Holland, held by Eric Lette, there was an official turnaround in the assessment of movements in dressage tests.

It was no longer the mistake, but the quality of the movement within a dressage movement that came first in the assessment and became the starting point for finding marks. Errors were subtracted from the mark for the basic quality of movement within a dressage movement. A technical error in the piaffe no longer automatically led to a mark 5. It was now necessary to first assess the movement quality and then deduct points if necessary.

The aim of this new approach to finding marks was to try to dissuade the judges from „error checking". General Niemack had already warned of this concern at an international judges' seminar in 1960 by asking the judges to distinguish the leg mover from the back mover. What was new was recognizing the true value of a movement and putting it in the center. However, this new approach to finding marks includes the possibility that certain breeding "fashions" or "preferences" influence the judgment.

With the increasing importance of the quality of the basic gaits, there was also a more detailed movement pattern of the basic gaits. For the dressage horse tests developed in the 1980s, positive criteria of the basic gaits were explicitly defined. In general there has to be said, main criteria of all gaits were described as supple, elastic, natural, balanced, round and without any tension. Spectacular or anything similar has never been a required criterium.

The clear definition of all gaits and movements actually made the question of taking individual conformation into account dispensable. None of the current regulations stipulates that consideration must be given to the conformation of the horse when judging a dressage test and, accordingly, when evaluating the piaffe.

The increasing importance of basic gaits in dressage sport led to a certain exclusion of certain horse types, especially in the young horse dressage tests.

Regardless of this, it still makes a lot of sense that the priority remains keeping horses healthy. Horses, also with less quality of movement, are demanded to be successful in dressage and are worked towards an increased collection.  The improvement of the collection and consequently the improvement of its balance are paramount and have little to do with the quality of movement demanded today in dressage competitions. It is crucial, however, that every horse should only be challenged in collection in accordance with its natural abilities.

The emphasis on the basic quality over the years led to the occasional top ranking of horses with an outstanding basic quality in the movements in Grand Prix tests, but their piaffes were in some cases green.

Related Link
The Essential Guide to the Piaffe - Part I: The Piaffe is a Means to an End