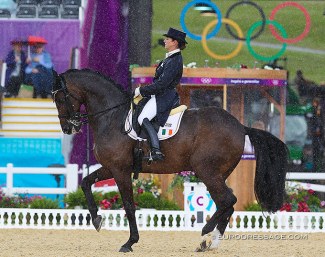 Anna Merveldt's London 2012 Olympic Games horse Coryolano was put down last week at the age of 24.

Coryolano was a 1996 born Bavarian warmblood by Coriolan out of Florina (by Gajus x Krokus x Gin). He was bred by Johannus Sailer. The FEI databae wrongfully lists him as sired by Cheenook.

The bay gelding made his show debut under Anna Merveldt in July 2006 at the national show in Königsbrunn. Their CDI debut was at the 2007 CDI La Mandria. They rode at Lipica, Achleiten and Fritzens that year in preparation of their first European Championships together in La Mandria in August 2007, where they finished 46th with 62.708%.

In 2008 they rode the World Cup qualifiers in Lipica and Marianske Lazne alongside Frtizens and Stressen.  In 2009 Anna and Coryolano represented Ireland at the 2009 European Championships in Windsor, where they were 25th in the GP Special with 67.125%.

The pair competed consistently from 2010 till 2012. Merveldt declined to ride at the 2010 World Equestrian Games in Kentucky due to training commitments, but representing their country again at the 2011 Europeans in Rotterdam (4"rd in the Grand Prix with 66.231%). The culmination of their partnership was riding at the 2012 Olympic Games in London, where they narrowly missed out on qualifying for the Grand Prix Special with a very creditable 69.772% during a torrential downpour on the opening day of the Grand Prix competition.

Owned by Anna and Christine Breitinger, Coryolano helped Merveldt to win three consecutive The Irish Field Dressage Rider of the Year awards from 2009 to 2011 in recognition of their international success. The pair was trained by Johann Hinnemann.

"Coryolano spent his last years happily out on grass in Bavaria," said Anna. "His exceptional character enabled him to compete at international level.  We had amazing times together.  You always knew when riding up the centre line that 'Cheeky' would perform."