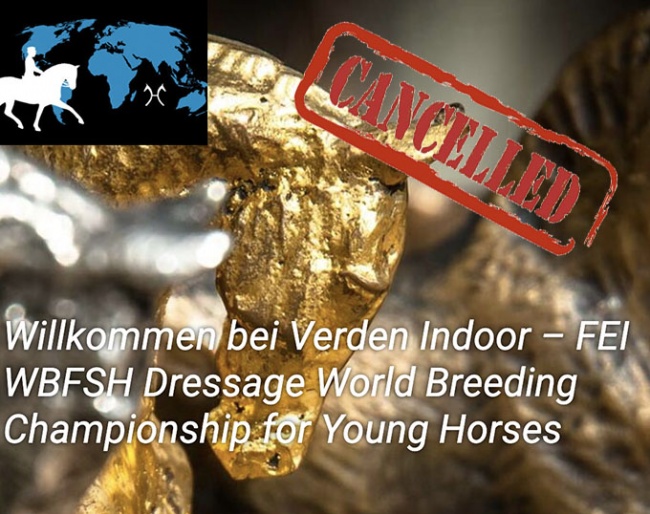 Rumours were running rife this week and today. At 17h00 they were officially confirmed: the 2020 World Championships for Young Dressage Horses have been cancelled.

"The internationality makes the hosting of this event impossible," the HV press release read.

"A few weeks ago additional measures were added to the event protocol for the World Championships for Young Horses by the FEI and the Organising Committee, in an attempt to further mitigate the risks of the Covid-19 virus. After several meetings between the FEI, WBFSH and the OC and despite the updated mitigation plan, the regrettable decision was made that the best and only option is to cancel the event," said Jan Pedersen, President of the World Breeding Federation of Sport Horses (WBFSH).

The cancellation of the World Young Horse Championships means yet another intercontinental Championships getting scratched off the 2020 calendar. Only the 2020 European Youth Championships took place this summer in Budapest, Hungary.

Not so much the local restrictions in the Verden area were the cause of the cancellation, according to the organizers, but more so the regulations concerning quarantine and testing upon transit and return to riders' home country.

Riders could be held responsible for their own choice whether they wanted to participate in the World Championships, which would have been set in a corona proof environment with a mandatory negative corona test for anyone on the show grounds. However, the OC has taken up responsibility.

"The safety of everyone involved is our top priority and we cannot expect anyone to take long detours when arriving or to have problems returning home just before Christmas," said show director Wilken Treu, who is also managing director of the Hanoverian Association. The 2020 WCYH expected to receive riders from 23 nations.

“If several judges could not have arrived due to a positive test, according to the FEI regulations, a German judge could not have simply moved in given that these Championships are World Championships. Moreover, we would have had to expect at any time that entire federations would cancel the participation of their horses at short notice while other nations were already on their way to Verden," Treu added.

“It is very regrettable that these Championships have had to be cancelled, but clearly the travel restrictions have made it impossible for the Organisers to go ahead, even though they had explored every possible avenue to run the Championships safely and behind closed doors”, said FEI Director Dressage, Bettina De Rham.

The 2021 World Young Horse Championships are scheduled for August and will take place in Ermelo, The Netherlands, on 26 - 29 August 2021.