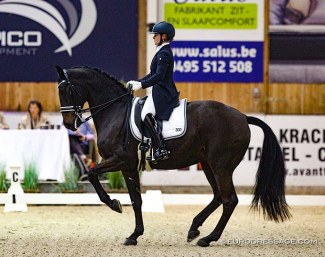 Australian Grand Prix rider Hayley Beresford will not be making an Olympic team attempt with the number one in her barn, Rebana W. The mare has been been given some time off and due to foal in June 2021.

Rebana W is a 13-year old Hanoverian mare by Rosario out of Ravinia (by Ravallo). She is bred by Sandra Winter.

From Young Horse to Grand Prix

Initially owned by Irina Reisinger, Rebana W showed at the 2013 World Championships for young dressage horses in Verden under Hayley Beresford. They finished 17th in the consolation finals.

In 2015 Rebana W sold to Beresford and her partner Jule Fehl. Hayley and Rebana W made their international show debut that year and moved up the Grand Prix level in 2017.

In 2018 they showed extensively at the CDI's in Le Mans, Ebreichsdorf, Munich, and Donaueschingen with a WEG team spot at stake but were not selected. In 2019 they campaigned at Ornago, Wiener Neustadt and twice in Munich. The 2019 Munich Indoor show in November was their last.

In 2020 Hayley made the conclusion that Rebana W needed some time off as the pair no longer found its groove together in the show ring.

"Rebana is not injured at all. She did have a kind of competition burn out though," Hayley told Eurodressage. "She has never been a fan of indoor competition, but her last CDI in Munich was a total disaster and it kind of coincided with me being completely overwhelmed with so much work and running our stable."

Hayley went back to the drawing board to figure out what the mare needed.

"It forced me to stop and think about what I was doing," she said. "I reset ‘us’ she did a CDN in Zweibrücken in February and was really good finishing 2nd but I just decided with COVID, not really wanting to push for a team spot with her it was just a good time to let her have her own baby

In the summer Hayley decided to put her in foal, her first self-carried one. The sire is the young stallion Zauberlehrling (by Zonik x Sir Donnerhall)

“She is due in June, because I made the decision quite late to put her in foal,” Hayley explained.

Rebana has had three embryotransfer foals in the past. The first one (by Floriscount) tragically died in a paddock accident as a yearling. The other two are rising 3-year olds, one by For Romance, the other by Don Olymbrio.

"They are very exciting to watch develop right now. We will see how they turn out," said Hayley.

Hayley is not sure if Rebana will return to work after her foal and her second Grand Prix ride, the 12-year old Oldenburg gelding Friedolin (by Fidertanzx De Niro x Plaisir d'Amour) has moved to Australia to be the ride for his owner Stephanie McDonald.

Hayley has trained 23 horses up to Grand Prix level so far and is not worried about the future. With her barn overflowing with horses, she has plenty to develop up the levels.

"I have a couple of horses playing with developing Grand Prix, but they are inevitably sales horses," she said. "I don’t have strong competition plans at the moment but am instead very very focused on my business, training and finding a balance. When the horses are running well enough, then I will find the shows."