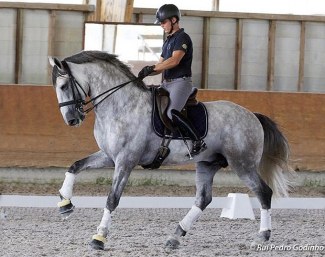 The grey stallion is an 8-year old Portuguese bred Lusitano stallion by Rubi AR out of Cortica (by Hostil). He is bred by Bruno and Adelino Carrilho of  Coudelaria Quinta dos Cedros in Sintra, Portugal.

Trained by Portuguese 2018 WEG team rider Vasco Mira Godinho, Imperador made his international show debut as a 5-year old in the young horse classes at 2018 CDI Alter do Chão . The pair competed in four CDI's in total between 2018 and 2020, all in Portugal, and won every single young horse test of the eight classes they have shown in.  The pair won the 7-year old division at the 2020 Portuguese Young Horse Championships.

Imperador dos Cedros was owned by Tiago Monteiro and Ricardo Pedrosa, the latter being the brother-in-law of breeder Bruno Carrilho.  The breeder sold the stallion to Monteiro and Pedrosa in October 2019, as announced on Facebook, but  the Portuguese equestrian federation only had the new owners listed on Imperador's FEI passport  on 19 January 2021, just days before re-selling to Luxembourg.

The grey stallion has been purchased by Luxembourg Lusitano lover, Manon Ackermann, and the ride given to Fie Skarsoe, who is based at Ecuries des Pres in Leudelange.

"When we found Imperador it was love at first sight and the perfect match for Manon and I," Skarsoe told Eurodressage. "It‘s the first Lusitano for me and I am really impressed about his character and his quality and rideability. He‘s still young and we have no hurry with him. We will slowly build him up and see what the future will bring. Vasco already did a fantastic job with him and have to thank him for this."

Skarsoe recently re-united with her former trainer Jan Bemelmans and has a barn full of horses, the majority sponsored by her student Victoria Schönhofen. In addition to Imperados, she will be campaigning So Dark (by San Remo x Rotspon) , Tiffany’s Diamond (by Temptation x His Highness), and Shy Boy (by Sunny-Boy x Weltmeyer) at FEI level.

"With my trainer Jan will will train him towards Grand Prix," Fie added. "I‘m very excited about our future."

Bemelmans is well acquainted with Imperador as he trained the stallion in several clinics at Coudelaria Quinta dos Cedros throughout 2020.