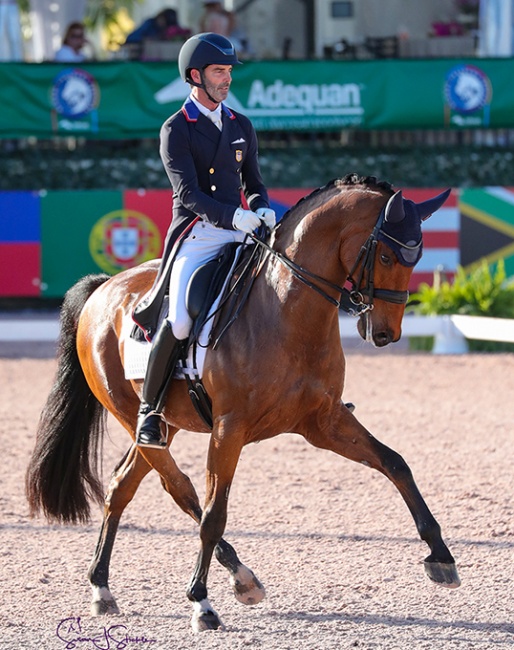 The 2021 Global Dressage Festival continued competition in its fifth week at the Palm Beach International Equestrian Center (PBIEC) in Wellington, FL, on Thursday, February 11, with a win for the USA’s Nick Wagman and Don John in the Grand Prix 3* for Special.

“This is our first real show in a year, so we were both nervous,” Wagman began. “Don John was pretty hot in there, but he knows his job, so I think that was his biggest strength, despite the fact that I was nervous. He didn’t let me down. I just watched the video [before the awards ceremony], and there are always things that you want to do better. I felt like he was exuberant but he did look fairly controlled when I watched the re-play. I’m glad that I got this one under my belt, so now we can really focus on getting our confidence back.”

Wagman continued, “He’s been around the block a few times now, coming to Florida, so he knows the routine. I was a little surprised at how hot he was in the warmup, but I think it’s just a weird time of day for us to ride, because he’s been such a Steady Eddie since we’ve been here.”

Wagman has his hopes set on the Tokyo Olympics, and his overall plan here in Florida will cater to that goal, but this week, the pair is working on having a solid start in the FEI ring after almost a year away. “There was a lot riding on today because I’m trying to get qualified for the five star, so I just need to get through this weekend. My number one goal is to have a successful show where we both get our confidence up, and I do what I need to do, and move on to the next one. To win like this is a wonderful bonus.”

Wagman concluded, “I hope to be invited to the five star, and depending on where we stand after that, we might stay for one more show in March. I’m not sure if there are any qualifiers in California anymore, so a lot will depend on how we do on Saturday and then at our next show.”

Second place went to Christoph Koschel (GER) aboard Holga Finken and Koschel Dressage Gmbh’s 2013 KWPN gelding by Charmeur, Imposant, with 73.118%. Jodie Kelly-Baxley (USA) and her own Grayton Beach, a 2011 KWPN gelding by Negro, earned a 72.382% to round out third.