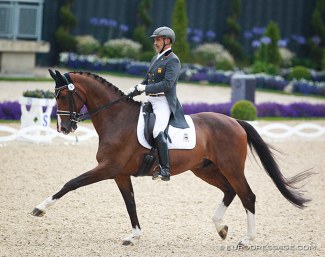 Spanish Grand Prix rider Jose Manuel Lucena Estrada has retired his number on horse, Wolk, from international top sport in 2019.  The 18-year old has begun a new chapter as a schoolmaster for his daughter Elisa.

Wolk is a 2003 born KWPN gelding by Rhodium out of Joy (by El Corona). He is bred by A. van de Heuvel in Uden, The Netherlands.

Lucena acquired the brown gelding as a 3-year old in 2006.

The pair made its competition debut in the spring of 2008 in the 5-year old classes and a few months later competed at the 2008 Spanish Young Horse Championships at Yeguada San José, where the inexperienced horse went from a 13th place in the first round, the a 6th place in the second, followed by a second place in the Finals.

In 2012 the pair made its international show debut at small tour level at the CDI Toledo. In 2013 they did one international in Madrid and won the Inter I kur to Music at the 2013 Spanish Dressage Championships.

They made the transition to Grand Prix level in 2014 at the CDI Barcelona.  The combination only once travelled outside Spain in their most successful year in their career, 2016. Their scores had been improving and they showed team potential at the CDI Oliva Nova as well as at the Spanish Grand Prix Championships that year, which led to their selection for the 2016 CDIO Aachen, where they finished 24th in the Grand Prix with 68.786%.

"The selection for Aachen was quite the surprise," Lucena told Lilyforado.com. "It was an Olympic year, and Aachen is where the team usually goes. At no point did I think I was getting selected. I was so excited, like a kid in a candy store. It was the culmination of all my work."

Lucena had once competed before in Aachen, in 1998 aboard the Dutch warmblood mare Elorianne (by Zooloog x Nepal). They also represented Spain at the 1998 World Equestrian Games in Rome.

Their last CDI was in April 2018 in Segovia. Their last national show was in March 2019 when the horse was 16.

Since Wolk's retirement from top sport, he has been a school master for daughter Elisa at home.

Jose has moved on with the 7-year old Westfalian Franzis (by Franziskus x Riccione), bred by Anja Hummelsheim in Germany, and the 7-year old KWPN Jethro L (by El Capone x Rousseau).