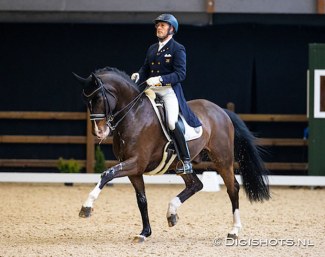 Quentano is a 12-year old Hanoverian gelding by Quaterback out of Dancing Lady (by Dartagnan). He is bred by Wilfried and Udo Eichler.

The bright bay gelding was first owned by Isabelle Bergmann. Under Madita Zurheide he made his international show debut at a 6-year old in the young horse classes at the 2015 CDI Perl.

Quantano sold in 2018 through Hof Kasselmann to the British based Finnish rider Niina Nilosaari. Under the tutelage of British Olympian Emile Faurie the horse was developed to Grand Prix level.

For the 2021 show year, Niina has decided to get back aboard of Quentano herself and shipped him to The Netherlands to be coached by Finnish team trainer Rien van der Schaft.

After a long competition lul due to corona, Niina asked Rien to re-introduce Quentano to the show ring and the pair had their debut in Tolbert.

"I came to Holland two months ago and train with Rien at the moment," Nilosaari told Eurodressage. "Quentano has been going really well here, but because he is been really tense and quite tricky at the shows I asked if Rien could try ride him once or twice at some shows and see how it feels. He was too relaxed in Tolbert, which is good so plan is I take over to compete soon."

Rien's last international competition dates back to the CDI Maastricht in November 2008 (!), where he competed Madorijke. On national level in Holland, Rien continued to compete. His competitive heydays were forty years ago, when he was member of the Dutch team from 1979 till 1983 and competed at the Alternate Olympic Games in Goodwood, as well as two European Championships and one World Championship.

Nilosaari had planned on competing Quentano at the CDI Exloo, but the show has been cancelled. She is now looking towards Ankum as a next starting place.