2021 Wellington 5* without American All Stars? 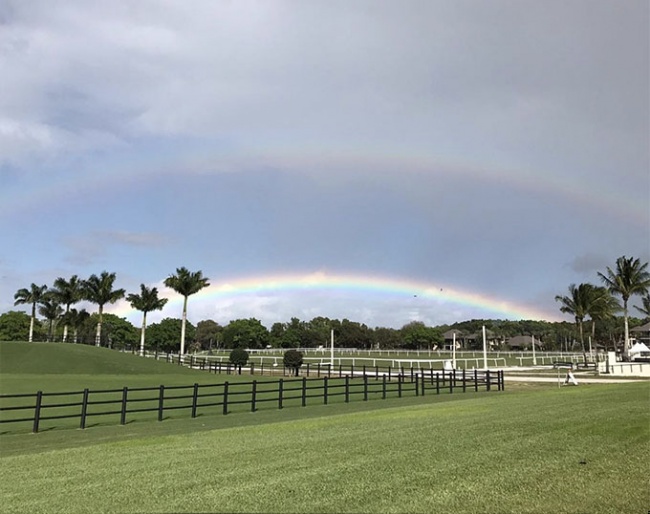 This week the 5* competition takes place in Wellington, Florida. Normally this event marks the epitome of the annual Global Dressage Festival with its biggest purse. Often it is a designated team observation/selection trial for the major summer Championship of the year. However, over the past few years this particular 5* weekend has stood out by the absence of America's top horses.

No Welly World This Year

I normally attend this 5* event religiously and this year will be the first time in eight consecutive years that I won't be there to make an inventory of the state of dressage in the U.S.A. while soaking up some sun and Vitamin D. With tourist travel on an ESTA prohibited and the US Embassy in Brussels not giving me the required National Interest Exemption (NIE) to enter the country to work, I declined to pull strings and beg for bureaucratic favours.

The United States Equestrian Federation has been selling Waivers (which get you a NIE) at 350$ a copy to every CDI rider and their "staff". Your pedicure would even make it to Wellington if you exploited the rider connection and paid the ridiculous  fee. For the press no (free) entrance is provided by the show organisation nor USEF/USOC.

While Europe had its moment of winter last week - 7 days with 10 centimeters of snow and -10 ° C - followed by an early spring with 18 C° sunshine a few days later - I now sit behind my computer, at home, like I have done for almost a full year due to the corona pandemic, and browse the starters' lists, relying on live streams to follow the competition.

While the sun is shining here through the living room window, the rays lighten my mourning over not going to Florida. What also makes it easier is a quick look at the entry list and realizing that for the 5* several of the American all stars - once again - have decided to stay home.

For the past few years it seems to have become a trend amongst American riders to actually avoid the most important Florida show of the year. The "light showing schedule for top horses" has become practice and policy across the globe. Once a horse is confirmed at the top, it is bubble wrapped and spared. The best horses are only shown at the absolute minimum amount of competitions that guarantees team qualification (usually 2 before the championship). Just think of how few shows Valegro did in his last years in sport, or Verdades and Dublet. Health certainly had to do with it, but the mileage on those horses was never particularly high.

There is nothing against good, healthy horse management, of course, but for the sport it's a pity that the best stay at home. I can't help but compare the situation to a private investor buying a Van Gogh at Christies for a gazillion euros and then locking the painting in a vault for no-one to be seen.

Where are the All Stars?

The 2021 edition of the Global Dressage Festival has marked by the Canadians so far, with the northerners blasting away on their carefully produced horses. Routiniers Brittany Fraser, Jill Irving, Lindsey Kellock and Naima Moreira-Laliberte are all there, Fortmuller is presenting her new ride Goldfinch.

Year after year Americans have to rely on top dressage rider Steffen Peters to bring that All Star magic to Wellington and he lives on the West Coast. Peters is always there (maybe competing his horse even too much, according to some?!) and so is Bateson with Alcazar, but where are the rest of the star horses?

The American A-squad for 2021 has six pairs listed. Fortunately four of them will ride in the 5*, but two actual TEAM horses are absent (Salvino, Lonoir). Three combinations are B-squad listed and just one is riding this weekend (Nintendo). Millione (Jennifer Williams) and Don John (Nick Wagman) are having a rest for this important show.

And where is America's future? Sarah Lockman and First Apple made their CDI Grand Prix debut in 2020 but this year have mainly been doing rounds in the national ring. Fortunately this weekend they are back in the CDI ring at 3* level. Alice Tarjan has four (rising) Grand Prix horses in her barn (Candescent, Donatella M, Serenade MF, Harvest) but they are not appearing in any CDI classes so far, despite Candescent's CDI debut in 2020. Ashley Holzer has a barn full of quality horses, but where are her confirmed stars Havanna and Eastwood? She also has Radondo and Valentine, but the latter is green at Grand Prix. Only Valentine is entered in the 3* this weekend. The Grand Prix debut of Kasey Perry-Glass' Mistico TN is also eagerly anticipated.

I know, I know, I'm impatient and I know the process to Grand Prix is a long road with many obstacles. However, if a show is marked as five star, you expect quality to appear. The CDIO Aachen is also a 5* event and not a single rider would even dare to suggest to show organizer Frank Kemperman, "I think I'll bring my number two instead" or "Hey Frank, I'll skip Aachen this year, no biggie."

In its long and repetitive three-month show season, Wellington seems to be unable to generate a similar buzz and give importance to at least ONE dressage competition on its calendar.

I wonder if this oversupply of shows has dulled riders from building momentum in the season. The Wellington OC offers a purse of prize money envied and unparalleled by shows in Europe, yet the cash does not generate a magnetic pull to compete in a 5*. The next time I hear an American top rider complain about how expensive the sport is, I'll turn a deaf ear knowing there is so much money up for grabs to support their riding, if they go for it.

To come to a conclusion with this short lamentation: I think it's a pity there is not one big show in Wellington, where the best of the best make it a point to meet. A 5* is supposed to be a celebration of the sport and should be the biggest dressage competition in the year of the U.S.A.. Although this year there is quite a nice field there, the last time Wellington was able to boast a spectacular entry field dates back to 2016 when the 5* was the Rio Olympic qualifier.

Look at the show results, those were the heydays of U.S. dressage sport in Wellington. The field for 2021 can be seen here.