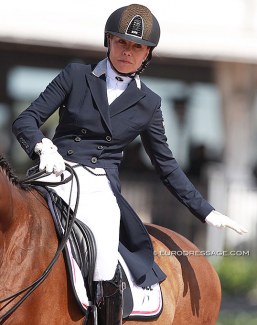 Georgian Grand Prix rider Joanne Vaughan got severely injured in a riding accident at the 2021 CDI Wellington on Sunday 28 February 2021.

The 59-year old was launched from her horse Forbes, when suddenly the jet sprinkler system starting working during the warm-up.

Vaughan was immediately transported to the hospital for diagnosis and treatment.

"I am not in a good way," Vaughan told Eurodressage from the hospital. "The large jet sprinkler started up when I was just in front of the dressage boards. My horse bolted and swerved and I fell off almost backwards onto the boards. I have a broken collarbone, several fractured ribs, a bruised and collapsed lung. They will tell me today if an operation is needed for my lung."

She continued, "who would have expected the jets to start up at 0930 in the morning? I heard the Korean rider in the warm up with me also had a problem but managed to stay on. Really bad luck I was in front of the boards."

Vaughan was riding her horse Forbes, a 10-year old Hanoverian gelding by Fidertanz x Rohdiamant, which she acquired at the 2014 PSI Auction for 320,000 euro. She has been in Florida this season to compete at small tour level and was preparing him for the Intermediaire I Kur to Music ride that day.

"I have been riding my horse since he was 3 and never any problem," she added.

This is not the first time that Vaughan got injured in Wellington. In February 2016 she fell of Stuntmann af Hvarre, a now retired Danish warmblood by Stravinsky xx x Aleksander. The black spooked during a schooling session in the main arena and crashed against a car that was on display for a sponsor in the corner of the arena. The lingering pain to her foot made her decide to visit the hospital two days after the accident. A double fracture in her ankle was diagnosed.