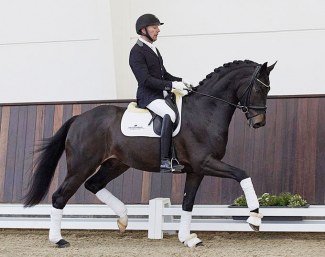 For the second year in a row Helgstrand Dressage was notified by the Westfalian society that a stallion they purchased at the licensing, has tested positive for prohibited medication.

In 2019, Helgstrand Dressage purchased licensing champion Dynamic Dream (by Dream Boy x Sir Donnerhall) at the 2019 Westfalian Stallion Licensing for an auction price of 1.9 million euro. Three months later it was announced that the stallion had tested positive at the licensing for Flunixin, a nonsteroidal anti-inflammatory (NSAID) used "in the horse for the alleviation of inflammation and pain associated with musculo-skeletal disorders.  It is also indicated for the alleviation of visceral pain associated with colic."

At the licensing Dynamic Dream was handled by Jan-Dirk Giesselmann, and owned by his father Heinrich in partnership with C. van der Laan. Giesselmann stated that the horse was treated for a "skin problem."

Helgstrand accepted the results, the horse lost its licensed status, but Andreas chose to retain the horse because he was convinced of its quality. The stallion was re-presented at a Westfalian licensing in the spring of 2020 and accepted. He was retested and found negative.

In 2020 Dynamic Dream sustained a potentially sport-career ending injury to his neck while covering.

Darling's Dream became the reserve champion of the 2020 Westfalian Stallion Licensing last November. The Diamond Deluxe x Lissaro van de Helle x Labrador colt is bred and was owned by Wilhelm Rüscher-Konermann.  He sold at auction to Helgstrand for 600,000 euro.

"We have experienced it before, that a horse acquired at an auction, was positive in a drug test," Helgstrand communicated. "We have therefore decided to claim a cancellation of the purchase from both the auctioneer and the breeding federation Westphalia, since our basis for purchasing obviously has been false."

According to Helgstrand, the Westfalian breed society as well as previous owner Rüscher-Konermann refuse to annul the sale and take back the colt.

"The stallion, Darling’s Dream has not shown his true face at the licensing nor the following auction," said Helgstrand. "We do simply not understand that the federation in Westphalia, who was also the auctioneer, will not take responsibility and accept the return of the horse. We will maintain the claim to return the horse against both the federation and the seller, if necessary by legal actions, which is currently an ongoing process in Germany at the moment."

"The positive medication finding was by no means a deliberate manipulation of the stallion, but a feed contamination with caffeine due to a contaminated feed delivery of the manufacturer," said Thomas Münch, breeding director of the Westfalian society.

According to the FEI clean sport database, "caffeine is a stimulant of the central nervous system and cardiac muscle. Caffeine is a Specified Substance. Specified Substances should not in any way be considered less important or less dangerous than other Prohibited Substances. Rather, they are simply substances which are more likely to have been ingested by Horses for a purpose other than the enhancement of sport performance, for example, through a contaminated food substance."

Helgstrand told Eurodressage exclusively: "we just don’t want a doped horse and the rules are like it is. Doping is not allowed. Last year we also found a fair solution and this time they are not interested in anything. Therefore they need to take it back like the rules said."