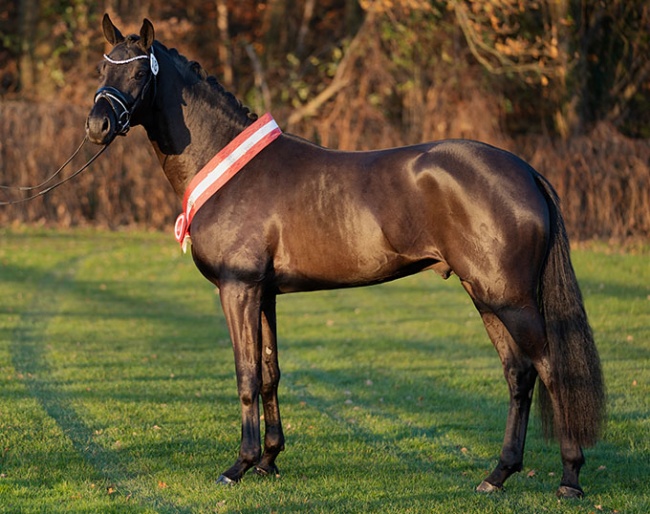 The black colt Forever Love (by Fair Game x Destano) was named the champion of the 2020 Westfalian Stallion Licensing in Munster-Handorf on 23 November 2020.

Of the 42 colts that actually finished the two-day licensing process, 31 were approved. 10 were named premium.

The Westfalian Licensing Committee handed out licensed cards as if they were giving Christmas presents. 31 colts out of 42 were approved (73%)! In comparison the Hanoverian society was also very lenient this year, licensing 25 colts out of 34 (73%). However in Oldenburg the selection was much stricter with 17 licensed out of 31 (54%).

The Westfalian strategy seems to be a "people pleasing" one, instead of selection strictly on blood, conformation, movement, and even colour (predominance of black and dark bay colts).  With the bar set lower in Munster-Handorf than at other approvals, the Westfalian licensing has become a magnet for stallion owners to get their colts licensed and sold easily.

The  uncloaked commercial approach showed off this year in the naming no less than 10 colts premium stallions, of which 9 were - not surprisingly - for sale in the auction, boosting the wallet of the society. Strongly moving colts that were not for sale were disregarded for the premium title.

The Westfalian strategy certainly pays off, with an average sales price of 143,432 euro per stallion this year, but whether this path will work for the long term of selecting and breeding quality and diversity, only time will tell.

A high amount of colts dropped out during the two-day licensing process. 49 colts were entered for the licensing on Sunday 22 November and by Monday six of them has been "withdrawn" and one was "not presented" at all, ending up with a lot of 42.

Reesink's Secret x Biasini was withdrawn before the lunging phase.

The reshuffling of the participants' field should not take away from the shining moment of the licensing champion. The black Forever Love (by Fair Game x Destano x Harvard), bred by Konrad Mensch and owned by Joachim Scherer, was the number one of the 2018 crop of colts in the premium ring.

"A stallion as perfect as one could hardly wish for," said Westfalian's provisional Breeding Director Thomas Münch in the press release.

At the Hybrid Auction following the licensing ("hybrid" meaning bidding could be done online or on the phone, as well as live bidding at the event), Forever Love sold for a whopping 800,000 euro to Helgstrand Dressage.

The hybrid auction concept is brand new in this corona year with travel restricted due to the pandemic. The Westfalian society renamed the hybrid concept to "OnLive" Auction. The majority of the colts sold to people bidding on the scene and not via the computer.

Instead of keeping the colt for his own station, Rüscher-Konermann put him in the auction and the decision paid off. Helgstrand Dressage purchased him for 600,000 euro.

Two stallions tied in third place in the premium ring.

Alfons Baumann's Imperial MT (by Ibizi x Davignon x Apart) was the third ranked stallion, which in Germany they call "second reserve".  Baumann, who recently held a major stock sale of his horses in a yard auction, did not sell this colt, but kept him for the licensing.  The colt ranked third in the premium ring and sold at the licensing auction for 172,000 euro.

The second third placed colt was Duchamp (by Don Allegro x Belissimo M x Sir Schölling), bred by Eward Descher and presented by Mathieu Beckmann. He sold for 226,000 euro to Switzerland through an online bid.

The most expensive, non-licensed stallion was the Morricone x Diamond Hit selling to a bidder at the event for 33,000 euro.