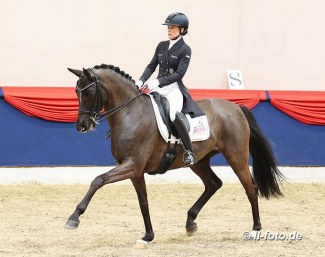 At the 2021 CDN Vechta on 28 February 2021, the pair competed in the national Grand Prix test to finish second with 74.133% behind Sandra Nuxoll on the 2020 Louisdor Cup finalist Hanami.

This was in fact the pair's second start together. In January 2020 they competed in the unrecognized Test of Choice class at the CDN Ankum and scored a reported 71%.

The CDN Vechta was the first official competition of the duo.

"Saphira Royal and I rode our first Grand Prix together in Vechta," said Sprehe. "She is really eager and always wants to do everything right. She gave me a super feeling and we were able to finish second with 74.13%. There is room for improvement and I'm looking forward to the next show."

Saphira Royal is a 12-year old Rhinelander mare by San Amour out of Her Highness (by Monteverdi x Mackensen). She is bred by Herbert Werth and was originally named Saphira W.  As a youngster she was first owned by Christine Bauer.

In 2016 the mare sold to Johann Hinnemann. Wolf and Saphira Royal won bronze at the 2016 World Young Horse Championships in Ermelo after which she was sold to Russian Elena Knyaginicheva.

Sprehe has been riding the mare for her Russian owner since the spring of 2019.