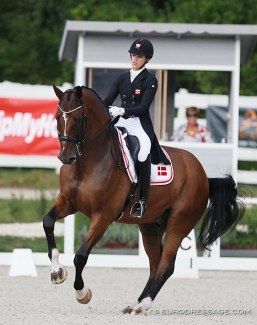 Austrian Young Rider Nicola Ahorner has acquired Foco Loco W, the winner of the Kur gold medal at the 2020 European Under 25 Championships.

Foco Loco W is a 16-year old Belgian warmblood gelding by Sierappel out of Weingräfin (by Wendekreis x Grande).

He is bred by Johan Korsten-van Duffel in Lommel, Belgium at brood farm Weidehof. He was owned by Yvonne Losos de Muniz from the Dominican Republic.

From Belgium to Rio

Foco Loco W began his career at regional level in Belgium, first under Yentl Korsten and then with professional Nick Van Laer.

The Wellington, Florida and Spain based Yvonne Losos de Muniz purchased him in 2013.

Yvonne and Foco Loco W made their CDI show debut at small tour level in September 2014 and competed at the 2014 Central American Games in Veracruz, where they were second in the freestyle. In 2015 they moved up to Grand Prix level in Wellington, Florida and qualified for the 2015 Pan American Games in Toronto, but were eliminated there in the Grand Prix.

However, in 2016 Losos achieved her long coveted dream, the Olympic Games, and finished 59th in the Grand Prix in Rio de Janeiro.

German based Spaniard Borja Carrascosa took over the ride shortly after Rio and became very successful with the bay gelding.

He re-trained the horse and took it to the next level, competing on the 2016-2017 World Cup circuit in Stuttgart, Salzburg, Amsterdam, Neumunster and Den Bosch.

Foco Loco W drew the attention of buyers and was sent to Andreas Helgstrand's yard to be sold. However, the deal fell through and Foco Loco W returned to Yvonne in the winter of 2017-2018.

In 2018 Losos de Muniz made a leap in her scores and began to consistently achieve round 70% on Foco Loco W. They competed at the 2018 World Cup Finals in Paris but missed out on the 2018 World Equestrian Games in Tryon.

After another successful season in Wellington in 2019, there were a few bumps in the road in their Canadian competition tour last summer with inconsistent performances when Yvonne also started to focus on her two other Grand Prix horses, Aquamarijn and Felicia.

Foco Loco joined her on a trip to Denmark in the autumn and stayed there for the winter to be sold.

Sales Horse and European U25 Champion

At Helgstrand the ride was allocated to rider Anne-Mette Strandby Hansen.

She made her national show debut on Foco Loco W in Esbjerg, Denmark, in January 2020, scoring 67.807% in the Intermediaire II. Their second show together was in Hjallerup, where they won the  Short Grand Prix with 71.396% and the Intermediaire II with 71.491%.

They were selected on the Danish team for the European Under 25 Championships in Budapest last August and surprised all by riding to a fourth place in the short Grand Prix. In the Kur to Music, however, they were an absolute league of their own and deservedly won the Kur gold medal with a 79.025% score. A few weeks later they also won the 2020 Danish Under 25 Championships.

The experienced Austrian youth team rider Nicola Ahorner acquired Foco Loco W in December 2020 as her Under 25 schoolmaster for the future.

"We’re really glad to have him. He’s such a gentle giant and a sweet character," Ahorner told Eurodressage. Nicola plans her competition debut when the Covid-19 / EHV-1 situation allows it. "As soon as it’s possible," she said. "Probably end of spring/beginning of summer."

Studying medicine at University, Ahorner has gone into her last year as a young rider and is preparing for Under 25. Her last team horse, Lezard (by Lord Loxley x Riccione) has been sold to Austrian Katharina Pölz.

In 2020 Nicola was strikingly absent from national and international competitions. Normally a steady contender for an Austrian team spot, in 2020 she was not part of the game.

"The reason why I didn't compete (in 2020) was a mixture of the whole corona-situation and University," Nicole explained. "Every time I felt I wanted to compete in a CDI something came up. Either an exam or the situation in Austria worsened. Uni is keeping me on my toes, and so are the horses!"