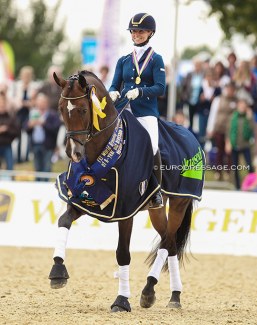 Sa Coeur is a 14-year old Oldenburg gelding by Sir Donnerhall out of Levantine (by Don Davidoff). He is bred by Paul Schockemöhle.

In 2010 Rocco di Pierro, an assistant rider for Isabell Werth at the time, discovered  the talented gelding at Schockemohle's Gestüt Lewitz and bought him. For two years he trained the horse.

In 2012 Rocco participated in two competitions and in the second one he scored a 9.0. Shortly afterwards Sa Coeur sold to Hof Kasselmann.

Eva Möller was paired to Sa Coeur in June 2012 and immediately qualified him for team Germany for the 2012 World Championships for young dressage horses in Verden.

Six weeks into their partnership, Möller and Sa Coeur claimed the gold medal at the World Championships with a 9.38 total score in the finals.

At the PSI Auction in December 2012, Sa Coeur sold as the price highlight for 2.3 million euro to Russian Elena Knyaginicheva.

Eva Möller retained the ride and reclaimed the title at the 2013 World Championships for young dressage horses in Verden, scoring 9.04 points in the Finals.

In 2014 she rode Sa Coeur in the Developing Prix St Georges horse classes in Verden and in 2015 in the Nurnberger Burgpokal qualifier in Hagen.

In 2016 Eilberg and Sa Coeur made their international small tour debut in Saumur, winning the Prix St Georges and Intermediaire I. They also achieved a hattrick at the CDI Roosendaal and went on to become the 2016 British Small Tour Champions.

Eilberg only had the horse in his barn little more than a year.

Knyaginicheva decided to move Sa Coeur back to Hof Kasselmann and in 2017 he was partnered with Insa Hansen, who rode him in the small tour at the CDN Zierow and CDI Hagen in April that year.

Later in 2017 British Emile Faurie took over the ride and prepared Sa Coeur for Grand Prix. They competed in the Intermediaire II at the  CDN Darmstadt and CDN Ankum in the autumn.

Sa Coeur then disappeared from the show scene for almost three years.

He returned in 2020 under Frederic Wandres at Grand Prix level. The new duo competed at the CDN's in Ankum and Hagen before travelling to the CDI Achleiten in Austria in July 2020, where they were third in the Grand Prix (72.326%) and third in the Kur (77.380%).

Based in Helmstedt, Germany, Pia trains with her father and Cora Jacobs.