Henri Ruoste Selected to Represent Finland at the 2021 Olympic Games 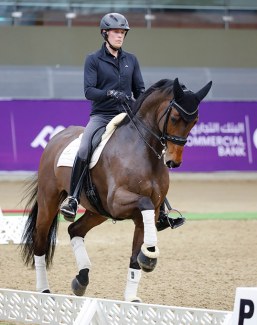 The Finnish Equestrian Federation has announced that Henri Ruoste has been officially selected as their individual representative in dressage at the 2021 Olympic Games in Tokyo.

the Finnish Olympic Committee's Top Sports Unit selected Ruoste as one of five new Finnish athletes for the Tokyo Olympic team. The selection was confirmed by the Board of the Olympic Committee on 9 March 2021.

Aboard the Danish warmblood gelding Rossetti (by  Romanov x Midt West Ibi Light), Ruoste secured an individual spot in dressage for Finland in 2019.

Ruoste has two horses as Tokyo potentials: Rossetti and his own and Jochen Arl's Belgian warmblood Kontestro DB (by Contendro x Cassini II), the only Grand Prix horse he has been competing since February 2020. Two weeks ago, Ruoste and Kontestro DB achieved a Finnish Kur record score of 81.265% at the CDI Doha.

"It is certainly every athlete’s dream to represent their own country at the Olympics," Ruoste stated. "It’s definitely a special experience that comes up maybe only once in a lifetime. For me personally, it’s a really big deal, and many, many years of work have been gone before it."

The German based Finnish rider continued, "the Olympic representation will certainly bring more enthusiasm and motivation, and hopefully also interest of a larger audience in dressage. At the same time, we are working hard in the sport to have a dressage team for the 2024 Olympics in Paris. It’s a long way to go, but everyone is really motivated to work for it."