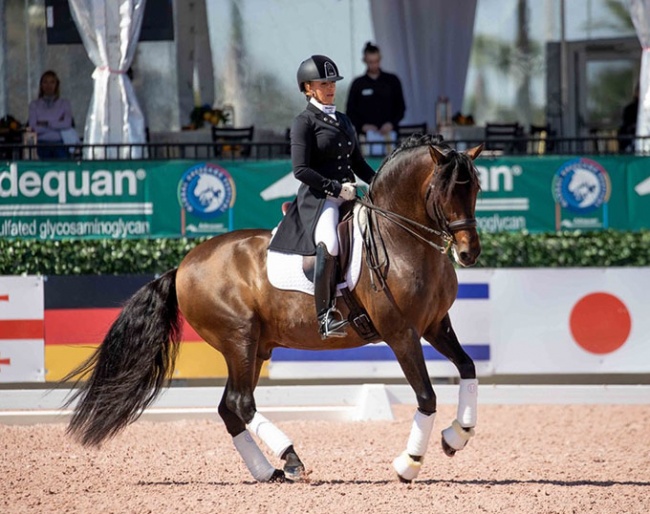 Amina Sade is an international dressage rider. She resides, during the summer, in Pawling, NY and moves to Casa Arte Equestre in Jupiter, Florida during the winter. The most enjoyable aspect to horse riding is the bond one creates. This is what happened to Amina and her P.R.E. horse Fiti Al.

Amina became an active rider in 2014. Before pursuing her equestrian career, Amina worked as a model in the fashion industry. Fiti Al has been her partner in crime and helped her accomplished all her dreams.

Amina fulfils all her goals she wants to reach not just with Fiti Al, but with her other P.R.Es mounts. Amina recently debuted her first Grand Prix. Her journey in the dressage world is the perfect example of the phrase “never surrender and believe in your dreams.”

What do you like most about the Spanish Horse? What captivated you about this breed?

Their heart, courage and versatility. I started learning to ride about 8 years ago and primarily on PRE’s. People often ask me why I don’t buy a warmblood to be more “competitive” but I wouldn’t trade my boys for anything. My PRE stallions are hot and spicy, yet I feel so safe with them. They go anywhere and do anything I ask. Even when I’m nervous they give me courage. They can be collecting for breeding in the morning, trail ride in the afternoon, head to compete on the weekend and they never miss a beat.

In 2020 you had your Grand Prix debut with Fiti Al. Did you expect such results?

I never expected to ride Grand Prix, let alone accomplish what we have. My husband must have secretly believed in us as he kept supporting and encouraging me as we progressed up the levels. I only had three dreams when I started riding; ride in a princess dress, ride on the beach and ride a freestyle. Fiti has made them all come true and more. G

rand Prix is when he actually started to shine; he became so confident and loves to show off. The harder the test the more focused he is and the easier it is for us to ride as one. I think we are just starting to showcase what he has to offer so it should be exciting as we continue at this difficult level. Someone told me getting to Grand Prix was the “easy” part, perfecting it is when the real fun begins. I’m sure that person didn’t mean training to Grand Prix was easy, just that what follows is so much more intricate you might forget how hard it was to just get there.

If you were to choose a competition/event of this season, which would it be?

I am really hoping to attend the first CDI at the new World Equestrian Center in Ocala, in April.

What is your long-term goal this season?

I didn’t have competition goals before but Fiti awoke something in me I didn’t know was there. Competing is fun and he inspires me to try and create what I have with him on my two up and coming PRE stallions.

With Fiti my goal is to ride with the same power at the shows as at home so with luck we can break into the 70’s in international competition.  With Flamenco YM I’m hoping to make his Grand Prix debut, and with my youngest C Discreto we will do the developing Prix St Georges.

I also like to play around with working equitation and western dressage. Whatever is feeling fun at the moment is what we do; it keeps them excited, never doing the same thing day in and day out. For all my stallions the goal would be to get more breeding exposure in the PRE world. The warmblood breeders have done a lot of cross breading to them. I am not sure if it has to do with the fact that our PREs were some of the first and still only a handful of PRE’s approved in other studbooks, such as the German Oldenburg Verband, or if it is just because warmblood breeders pay close attention to sport results. Because I am so incredibly fond of the pure Spanish horse, I want to see more pure breedings. I pay close attention to our stallion’s offspring and it would be wonderful to be able to develop one or more of them as they mature.

If you could ride a famous PRE horse right now, which would it be?

I do not know how famous this PRE is but it would be Mango Jacaro. This was the PRE that my riding idol Linda Swande was riding when I met her. Together they made the most elegant picture, and in every video, I saw Linda looked to be having so much fun! I watched them and I thought I want that to be me. I had just started riding when I met her. Later he was sold, but knowing what I know now I would love to sit on him and feel what she created. They were just spectacular! Linda and Jacaro were so inspiring that we decided to export one of our breeding stallions, C Olivo, to her stables for her to develop, compete and offer breedings in Europe.

What would be the show that you would like to compete in the most?

It would be really exciting for me to be able to have all three of my stallions competing at the US National Championships. That is, of course, a huge goal. I have never been to Nationals so to go with any of them would be exciting but to go with all three would be a dream! They all have the potential. Fiti is already qualified for Grand Prix and the Grand Freestyle and he got invited for the 2020 Championships that were canceled and extended to the 2021 season. One down, two to go! I would also love to spend a season in Europe competing, but I think that’s a little further in the distance.

Discover the beauty of the PRE horse at www.usprea.com