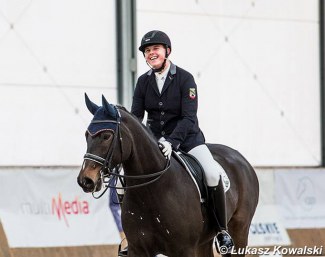 Franz Otto Damm and DSP Lifestyle, one of Germany‘s most successful junior/young rider combinations, are no longer a combination.  Damm has said goodbye to his competitive career and sold his top horse to fellow German young rider Helena Schmitz-Morkramer.

Lifestyle is an 11-year old German Sport Horse mare by Lord Fantastic x Samba Hit I x Champ of Class). She is bred by Joachim Bösecke.

Lifestyle was purchased by Franz' father Andreas as a youngster and first trained by Julia Schönherr, Franz' coach and resident trainer at Stable Damm in Zerbst, Germany.

Schönherr competed the mare at the 2015 Bundeschampionate and finished 12th in the finals.

In 2016 Franz took over the ride for a few shows but by the summer, Julia was back on board and steered Lifestyle to an 8th place at the 2016 Bundeschampionate in Warendorf.

As of 2017 Lifestyle was permanently allocated to Franz. The new pair became one of the most successful dressage combinations in the state of Sachsen-Anhalt.

Franz Otto Damm and DSP Lifestyle first came knocking at the door for German team selection in May 2017 by finishing sixth at the Preis der Besten in Warendorf, the first official team selection trial for the summer European Championships.  A month later the pair travelled to the CDIO-J Uggerhalne in Denmark, where they were second in the team test and fourth in the individual, instead of going to the second team selection trial in Hagen in June.

In 2018, Franz rode the first team qualifier in Warendorf, followed by Wiebsaden, where he won both tests.  At the end of the year he finished in a 13th place at the 2018 German Junior Riders Championships in Munich.

Moving Up to Young Riders

In 2019 Franz moved up to the Young Riders' division but did not go to the Preis der Besten in Warendorf, despite finishing third with 71.272% at the PDB qualifier in Kronberg. He did make an appearance at the second German team selection trial, the CDIO-YR Hagen, where was fifth in the team test (71.520%), 11th in the individual (67.843%) and fifth in the Kur (73.292%). At the 2019 German Young Riders Championships in Zeiskam he was 7th.

After Le Mans corona came and it put all competition to a halt.

The End of a Partnership

In 2020 Damm's long-time trainer Julia Schönherr left Stable Damm and the 19-year old decided to give up top sport riding.

Franz also began his college studies in Agricultural Science and focuses now on his education.

Between 2017 and 2020 the pair took their tally of regional and national victories at junior and young riders level to 44 wins.

Helena made her international show debut as a junior at the 2018 CDIO-J Uggerhalne on Doraya (by Don Frederico x Prince Thatch xx). In 2019 she campaigned Florentine (by Floriscount x Alabaster) at the CDI-J Exloo.

Schmitz-Morkramer and DSP Lifestyle made their show debut at the CDN Elmshorn on 28 February 2021 and scored 67,03% in a national S-class. They train with Sonja Marie Ellerbrock.