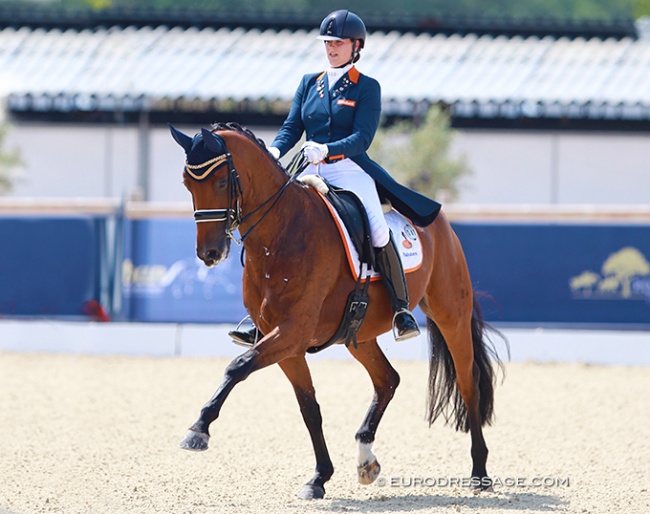 Equestricon's Walküre, the 16-year old Oldenburg mare who was the 2015 European Young Riders Champions, has been retired from sport and begun the second chapter in her career, broodmare.

Walküre is by Romanov out of Weissera (by Donnerschwee x Waldschutz x Futuro) and bred by Clemens von Merveldt in Vechta, Germany.

Finnish Grand Prix rider Stella Hagelstam discovered Walküre as a 5-year old  and bought her as a training project. She developed the mare up to Grand Prix level but did not compete her.

"I bought her in Germany when she was a 5 year old," Hagelstam told Eurodressage. "She was pretty small so I let her grow for a year more and only did some easy work with her. As a 6 year old she started showing some amazing potential and was extremely easy to educate. She learned everything up to Grand Prix quickly. I love educating horses and doesn’t necessarily compete them on the way up to Grand Prix. I had her with me at Horses and Dreams in 2013 as a training horse."

In November 2013 Hagelstam sold Walküre to German horse dealer Jochen Arl. This is when the mare received the prefix Equestricon.

Walkure made her international show debut at the 2014 CDI Pompadour under French Alizee Froment.

A few months later the ride on the horse was allocated to Dutch young rider Dana van Lierop. The new duo competed at the 2015 in Drachten, Wellington, Nieuw en St. Joosland, Roosendaal, and Compiègne.

Van Lierop and Equestricons Walkure were selected on the Dutch team and won team silver, individual test gold and kur silver at the 2015 European Young Riders Championships in Vidauban, France.

They posted a world record score at the time.

In October 2015 Walküre sold to Agnete Kirk Thinggaard as a 10-year old, but the two never competed.

In 2017 Walküre was leased to Malaysian Qabil Ambak, who trains in Denmark with Dennis Fisker, Thinggaard's former assistant trainer. He won silver at the 2017 South East Asian Games in Kuan Rawang with her.

In 2018 the FEI also listed Ambak's family as owner of the horse. Qabil showed her once more at the CDIO Uggerhalne.

In November 2018 the mare sold to Luxembourg's Emma-Lou Becca as her new Young riders' horse.

Trained by Fie Skarsoe, Becca and "Leopard's" Walkure made her show debut at junior level the 2018 CDI Aachen Indoor. Two months later they competed in the junior classes at the CDI Lier.

In May 2019 they moved up to Young Riders' level and won the individual test at the CDI-Y Lipica. It was their last competition together.

Walkure was retired from competition sport in 2020 at age 15.

"She’s has been retired since last year, since I thought that she deserves it," Becca told Eurodressage. "She has always done everything for me in every competition and she always gave 100%. I am so thankful for everything she did for me. I learned so much from her and we also won some young rider competitions. She is such a sweet and adorable mare so that I decided to retire her after everything she has done for me and also in her past years with Dana van Lierop."

Walkure has begun a new career as broodmare. She is in foal to Glamourdale.

"She is now enjoying her life as a mother and she is already pregnant by Glamourdale," said a thrilled Emma. "I’m so excited for the future since she is a European Champion and Glamourdale is a World Champion! Can’t wait for my new little superstar!"