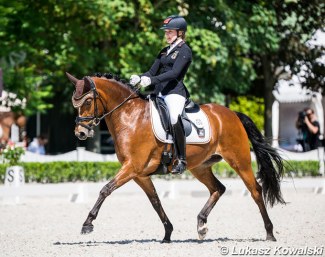 Cute Mrs Polly L is a 10-year old german riding pony by Cyrill out of Dali (by Dressman). She is bred by Elisabeth Limbecker.

Three Riders at the Start

The bay mare was first competed as a 3-year old by Nina Schultes in 2014. A year later, Maja Weber took place in the saddle and in 2016 it was Alina Schneider's turn.

Schneider qualified the mare for the 2016 Bundeschampionate in Warendorf, where they finished 8th in the 5-year old dressage pony consolation finals.

After the Bundeschampionate, Cute Mrs Polly sold to the Baumgurtel family and moved to their Freiberger Hof.

The ride on Cute Mrs Polly was allocated to Lana-Pinou Baumgurtel, who made her show debut on the pony in May 2017 in Delbrück. At the 2017 Bundeschampionate they placed 8th in the 6-year old Dressage Pony Finals.

The pair made its international show debut in July 2018 at the CDI Deauville in France, and also compete in Zakrzow that year.

With a barn full of ponies and the 2020 European Pony Champion Nasdaq to ride in 2021, Lana-Pinou said goodbye to Cute Mrs Polly, who is amicably known as ChiChi.

Anneke Weber is the new rider. The pair is coached by Anna Christina Abbelen.

Weber made her competition debut in 2016 on Coco and competed SLK Ma Jolie (by Top Montreal) between 2017 and 2019. Last year she focused on pony Destino (by Dressman x Marsvogel xx) and showed him through the summer.