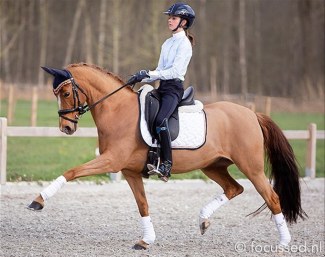 The internationally competed FEI dressage pony Morning Sky will be campaigned by the 13-year old Britt Buijzen. Already a year ago the pony was allocated to Buijzen.

Morning Sky is a 13-year old Welsh pony mare by Kielshoop Honeyhill out of Stella (by Orchard Boginov). She is bred by E. van de Voort.

Morning Sky has been a successful sport pony in The Netherlands from the start. Under Paulette Kral she won the Dutch Young Pony Championships as a 5 and 6-year old. She also claimed Dutch Champion's title at at L2, M1 and Z1 level with scores over 70%.

Under Lauren Neville, the mare made her international show debut at the 2016 CDI Le Mans, the pair's only CDI.

Morning Sky disappeared from the international show scene for almost three years, to return in 2019.

Seasoned Dutch pony rider Maud van Walstijn competed Anjershof Memoire, Bodethal's Kosima and Heidehof's Don Diego, before getting the ride on Morning Sky. The new duo made their international show debut at the 2019 CDI Exloo, also their only international as a pair.

Van Walstijn moved on with new pony Topsvoorter Monopoly, while Morning Sky was allocated to Buijzen almost a year ago.

Britt used to train with Demy Kurstjens, but is now being coached by Morning Sky's owner, Lauren Neville.