What's on Your Mind, Astrid? 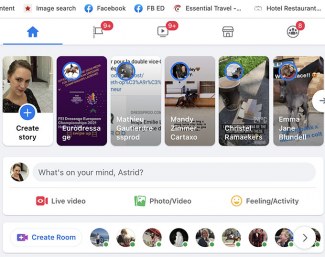 When you go and have a look what's new on Facebook, for the 86th time per day, my Facebook greets me with "What's on your mind, Astrid?"

I rarely answer that question, while on Eurodressage I speak up on daily basis. My personal Facebook is meant for linking the disturbing articles I read in the newspaper, the gorgeous sunsets I get to experience from my house, the occasional cup of cappuccino I like to share, or another trampoline accident that cracks me up.

However, as I committed to writing more editorials in 2021, I need to put finger to keyboard and actually do it. So often I think, "Oh my gosh, I need to write an editorial about that" and add the topic to my digital, yellow post it on my computer screen, that only gets longer by the day. Those planned editorials are always skipped and after a few weeks, I can't be bothered anymore.

Today, however, Facebook inspired me with their "What's On Your Mind" question. Maybe I should do an editorial like that and keep it very short.

Usually what's on my mind are very critical thoughts as it is in my nature (and imprinted by my academic education) to question everything instead of putting on pink glasses and gloss over imperfections like bakers do with that distasteful, gelatinous layer on pies to make them look fresher.

So here we go:

- I gave up on writing an editorial on the February CDN Tolbert, where Total U.S. scored 80.73% on its national Grand Prix debut. The first three steps on the scale of training are rhythm (= regularity), relaxation and contact. Hello judges, how did you ever pass your exams?

- Tolbert, and the second squad selection trial in De Meern two weeks, later did provide a stage for some of Holland's most exciting new upcoming GP pairs, which presented their horses in a relaxed and more natural way of riding: Marlies van Baalen with Go Legend, Dinja van Liere on Hermes and Vincent van Gasselt on Delacroix are the ones to watch in Holland.

- The Global Dressage Festival in Wellington, Florida, urgently needs to rebrand itself as the "Personal Best Festival". The riding in Wellington must have been ah-mazing this year with personal records being broken, week after week. Corona scores or actually improved riding? Who will tell?

- I wonder why in the U.S. there is no equestrian press that actually writes critically about the riding or judging ? Here in Europe  there are a few media who question issues in a test, scores being given, as well as praise the beauty of the sport (but in all fairness also that number is rapidly declining. I know of just three publications in total, St. Georg, Horses/De Paardenkrant and ED). The biggest U.S equestrian publication, The Chronicle of the Horse, has AMAZING writers, who are eloquent and produce superb content, but they refrain from providing commentary, while mainstream American newspaper (NYT, WP) do so. Interesting...

- And yes I will nag once last time that overseas journalists were not extended a waiver by USEF/USOC to enter the U.S.A. as working press in these corona times. However, rich European riders, horse dealers, trainers, grooms, parents, kids, farriers, as well as their pedicures, masseuses and chiropractors were all welcomed. OK, done nagging.

So what else am I thinking?

- I have always been told that "self-questioning" is an admirable character trait and the only way to grow as a person. A few weeks ago I was accused of being a "paparazzi". I wrote a lovely, positive article about a famous horse selling to a famous rider. The rider shot from the hip, calling it an invasion of privacy, and sling shot the threat of a lawsuit into my face. From a legal point of view, invasion of privacy is "an intentional or negligent highly offensive intrusion into the plaintiffs private life and resulting in damages to the plaintiff." Not really sure how a public athlete buying a wonderful horse is any way "offensive" or "damaging"?

- For the record, Your Honour, the ownership of horses is public information in the FEI database.

- Maybe, I should have gone to Law school instead of studying Literature? #noregrets

- The irony: the same rider shared a Eurodressage article on social media to promote one of the breeding stallions in the barn. I had a little chuckle about that one :) Smile people, life is too short for hard feelings and to waste energy on such futilities. It's dressage, not world hunger.

- I have to admit that I actually like researching a horse's history: where did the horse come from, who discovered it as a youngster, what did it do in competition, and who did it sell to. It's fun, playful research and accuracy and details make an article. At the moment I'm still on the hunt for the names of the Asian buyers of two internationally competed horses, Jessica Leijser's Djambalaya and Jorinde Verwimp's Kastar Hof ter Zeedycke.

- I'm so looking forward to Tokyo, but boy, with these corona measures there, it won't be a walk in the park. Testing pre-flight, post-flight, every four days, allowed no contact, sight-seeing, movement except between hotel and venue... and then the possibility of having to reserve a "slot" to be allowed to work at the venue. Can you imagine, that they will say: "hello, it's Grand Prix day today and there is no slot available for you to photograph the horses, please stay in your hotel!?" Now picture the emoticon of Edvard Munch's The Scream.. repeated tenfold. That's me.

- This little post is becoming much longer and more serious than planned. Dang. Spring has definitely arrived here at ED headquarters and with the EHV-1 lockdown almost lifted, I'm so looking forward to going out to shows again, photograph beautiful horses, meet like-minded people at 1.5m apart, and try to generate a buzz for the upcoming Olympics, which I'll be attending in Tokyo in July... if all goes well.