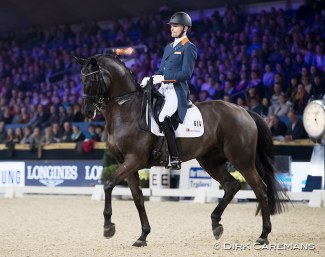 Bred by Belgian eventing rider Willy Sneyers in Retie, Belgium, Helena is out of Bmarone, who is a full sister to Calypso van het Goorhof, a Belgian international Grand Prix horse ridden by Ronny Coenraerds from 2011 to 2013. The chestnut sold to Swiss international junior rider Lia Garzoni.

In 2011 Helena made her show debut in Belgium on the young horse circuit as a 4-year old.

She was selected as one of two horses for a BWP dressage demonstration at the CDI-W Mechelen. Shortly afterwards she sold to Chris Oetzman.

The duo competed in two international competitions in their career: the 2015 CDI Arnheim, where they were 10th in the Prix St Georges, but then won the Intermediaire I with 68.684%. A year and a half later they competed in the World Cup qualifier in Mechelen in December 2016, scoring 70.380% in the Grand Prix and 72.800% in the Kur. Mechelen was their second and last international.

Ten months ago, Dutch Geertje Hoogendoorn switched trainers and began taking lessons with Theo Hanzon.  As the professional has two rising Grand Prix horses on the way, he thought it would be a nice opportunity for Geertje to take over Helena for one year as her Young Riders schoolmaster.

Geertje began riding Helena three months ago and made her show debut at ZZ-Licht level in Boxtel on 3 April 2021. They scored 71%.

Hoogendoorn used to train at Stable van Gils near Tilburg, but has now relocated her other two horses to Hanzon, the 6-year old Kristal (by For Romance x Metall) and the 12-year old Emporio Armani LD (by Johnson x Polansky). In November 2020 the 18-year old set up her own training and sales business as a professional dressage rider.