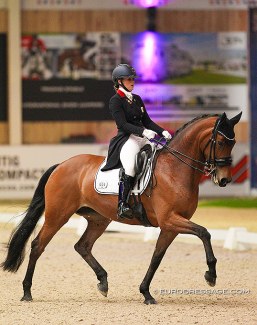 The 16-year old KWPN mare took Gallimore from Young Riders to Under 25 between 2015 and 2019.  She is by Scandic out of Redensie (by Jazz x Vincent) and bred by W. den Besten.

Annette Ballerina was first discovered as a youngster by British Grand Prix rider Rebecca Hughes at the Equine Elite auction in The Netherlands. Hughes and her business partner Julia Hornig purchased the young mare and named her Classic Ballerina.

At the end of 2011 Ballerina sold to the Gallimore family, meant as a successor for Claire's junior horse Daniolo, who ended up selling to Switzerland in 2013.

In 2013, Claire gave up her studies in Journalism at the university of Leeds to pursue a full-time career as a dressage rider. She was then based at Bartels Academy in The Netherlands.

Having switched trainers from Imke Schellekens-Bartels to the Dutch based Australian Tristan Tucker, Claire and Annette Ballerina made their international show debut in 2015 at the CDI Addington and further competed at Joosland, Roosendaal and Compiegne that year to clinch a spot on the British team for the 2015 European Young Riders Championships in Vidauban, where they finished 31st in the individual test.

In 2016 she rode her in the senior small tour in Oliva Nova.

Gallimore and Annette Ballerina moved up to Under 25 Grand Prix level in 2017.  Their international debut at that level was in Uggerhalne (DEN) that year, followed by the CDI's Hickstead, and Herning.

Their best season together was in 2018, when they competed in Lier, won two classes at the CDI Sint-Truiden, campaigned at Leudelange, before winning a double athe CDI Hickstead. They represented Great Britain at the 2018 European Under 25 Championships in Exloo, where they won team bronze and finished 28th in the Short Grand Prix.

Gallimore rode two more CDI's in 2019: at Le Mans they won two tests and their last international as a combination was the CDI Nieuw en St. Joosland in April 2019.

After having spent seven years in The Netherlands, Gallimore returned to the U.K. to set up her own business in Much Hadham.

Today she announced that her number one in the barn, Annette Ballerina, has been sold.

"A couple of weeks ago Bella left for her new home. I couldn’t begin to put into words what this horse has done for me. The past 10 years together has been the most incredible journey - both ups and downs," said Claire. "What stays with me is everything she has taught me the knowledge she has given me. Always making me better myself."

Gallimore has moved on with a new, younger horse, Joe Cocker B (by Johnson x Don Cardinale x Ex Libris) who is schooling towards Prix St Georges level.