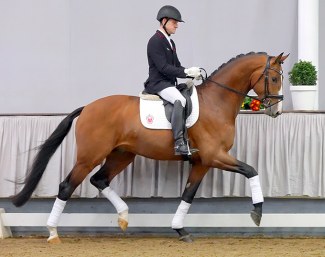 The 3-year old licensed stallion Zaunkönig became the best seller of the 2021 Westfalian Spring Elite online auction which had a collection of 56 dressage and jumper horses of which 46 sold.

Zaunkönig (by Zack x De Niro x Florestan) is bred and owned by Klaus Große-Lembeck and was licensed in Munster in November 2020. The bay stallion sold for 205,000 euro to a German dressage stable.

The second most expensive dressage horse was Lovely Girl W (by Livaldon x Florestan), which sold to a German for 93,500 euro. She will be trained and developed by Katrin Burger. The chestnut mare is bred and owned by Jörg Winterscheid. Burger will also get to ride the 3-year old Zumba (by Zoom x Rocky Lee), which sold for 60,000 euro.

Their best seller was the 9-year old small tour level trained Heracles (by Jazz x Don Schufro) which sold for 62,000 euro to a German bidder.

The most expensive one that moves abroad is the 3-year old licensed Danny de Vito (by De Beau x First Final), which relocated to the UK for 34,500 euro.

The 3-year old Financial Investment (by Feinrich x Dream On) moves to Austria for 34,500 euro and he will be joined by Rapunzel (by Real Grandios x Don Frederico) which sold for 28,000 euro.

The average price for a dressage horse in this auction was 39,643 euro.