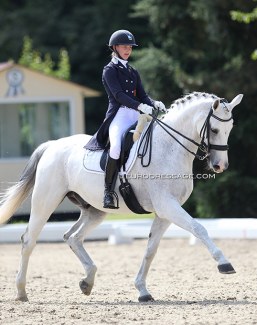 Rotschild was a Westfalian gelding by Roh Magic out of Private Number (by Pik Labionics x Frühlingsball x Radetzky). He was bred by Michaela Henkler.

He was first competed as a 5-year old by Tom van der Linde, who piloted him from A to M-level at regional shows until 2011. The grey gelding, who only had sight in one eye, sold to the Mende family in 2012 as the future junior rider's horse for their pony riding daughter Maike.

Maike began competing in Germany in pony jumping and dressage in 2010 on Petit Cadeau and Dear Little Yellow. In 2012 she stepped up to L-level and added ponies Nobel Nagano NRW, Die Kleine Ballerina, Tiffany, and international FEI pony DHI Peppino to her string.

Mende extensively competed Rotschild at national level, with multiple starts between 2013 and 2017.

Three months after her international show debut on ponies, Maike made her international junior riders' debut on Rotschild at the CDI Drachten in January 2014. That year she combined competing Rotschild with focusing fully on Desert Rose and Nobel Nagano in her last year on ponies. Desert Rose  took her to the 2014 German Pony Champion's title and team gold and a 16th place in the individual test at the 2014 European Pony Championships.

The pair was successful in their junior riders time and at the German Junior Championships. They were sixth in 2014, fourth in 2015, but did not ride at the 2016,  Nationals. Despite good results, nice riding and B-squad place, they never were in that highly competitive top four to make it onto the German team.

Initially trained by Helen Langehanenberg, in 2017 Mende made the transition to Young Riders Level and switched coaches to Jan Nivelle. She did just one CDI at this level with Rotschild, the CDI-YR Hagen, which was also their last international competition. She did not compete him at the German Young riders Championships in 2017 nor 2018. In 2019 she opted to ride the younger mare Florine OLD at the Nationals and placed 21st.

After earning their Golden Rider Badge in January 2018 for having achieved 10 S-level victories, Mende and Rotschild were on a lighter show schedule between 2019 and 2020 as she was busy developing her career as a professional rider and riding clients' horses.

In 2020 the 16-year old Rotschild did just two shows, one in January and one in October. Six months later he did his final test in Munster-Handorf on 1 April 2021, where they finished second in the Prix St Georges.

Rotschild suffered a severe colic attack on 12 April and despite all efforts could not be saved.

"I'm very grateful for all the beautiful moments I had with him every day. He will stay in my heart and I'll never forget him. I still can't grasp it that he is no longer here," said a saddened Mende about Rothi, which she also called her "White Tiger."