Laura Graves Returns to the Show Ring with SenSation HW 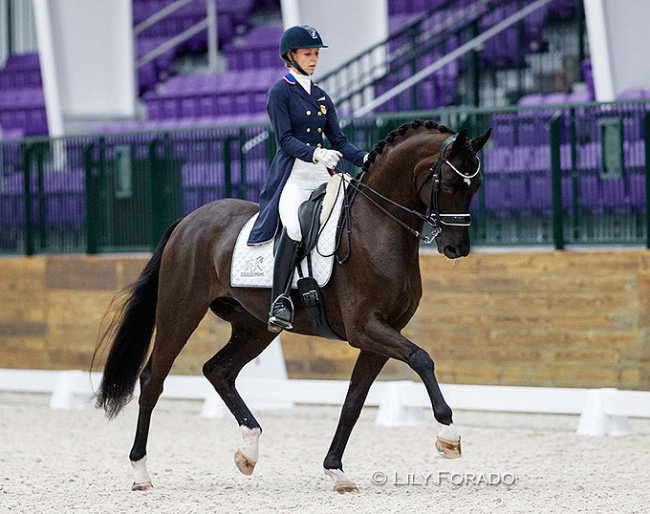 At the national dressage show held during the CDI Ocala at the World Equestrian Centre on 16 - 18 April 2021, Graves made her show debut on her newly obtained ride, SenSation HW.

Laura Graves was America's first and, so far, only FEI World number one ranked rider.

Aboard the now retired KWPN gelding Verdades (by Florett As x Goya), she was a fixed member on the U.S team from 2014 till 2019.

At the 2014 World Equestrian Games they finished fifth in the freestyle as best U.S. rider and they were the 2014 American reserve Grand Prix Champions. In 2015 they finished fourth at the World Cup Finals. At the 2015 Pan American Games they won team gold and individual silver. In 2016 they went to their first Olympic Games in Rio de Janeiro, where they were fourth in the Kur.

In 2017 they finished second at the World Cup Finals and won the Grand Prix Special at the CDIO Aachen, beating long-time rivals Isabell Werth on Weihegold. At the 2018 World Cup Finals they were second again (after winning the Grand Prix and beating Werth/Weihegold for a second time). She won the 2018 CDIO Aachen Grand Prix, but was then 11th in the Special. She bounced back to third in the Kur. At the 2018 World Equestrian Games in Tryon they won team and individual silver. Their final show in their career they were second in the 2019 World Cup Finals.

Verdades was officially retired from sport at the beginning of 2020.

With no real successor in the barn, Graves saw a door opened when she received the ride on Carol McPhee's 8-year old Westfalian gelding SenSation HW (by Sunday x Dancier x Lanthan) in May 2020.

Under Michael Bragdell SenSation HW won the 2018 and 2019 U.S. Young Horse Nationals as a 5 and 6-year old.  At the end of 2019, SenSation HW also won the USDF Third Level Open Championship.

Over the past year Graves developed the black gelding to small tour level and made her competition debut in the Prix St Georges in Ocala on Friday 16 April. They rode the test in a snaffle and placed third with 66.471%. A day later, Graces switched to a double bridle and rode a second national Prix St Georges test, which they won with 68.676%.