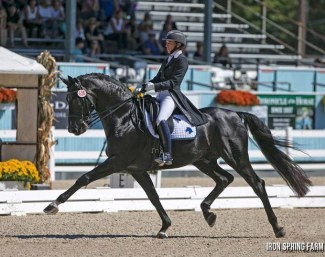 Uno Don Diego is the whole package of exceptional athletic ability, wonderful temperament and incredible genetics. As a competitive dressage horse, he won through Intermediate I. As a sire, his offspring are modern sport horses with winning records in both North America and Europe.

Uno’s son Independent Little Me was named the 2020 KWPN Gelders Horse of the Year. He also won the Silver Medal, ZZ-Zwaar Level, at the Dutch National Championships, with scores to nearly 78%. In 2019, the handsome chestnut stallion was top 8 at the World Championships for Young Horses, 6-year-old division.

Also in 2020, Daughter UNO Day Sun was set to represent Denmark at the World Championships for Young Horses, 7-Year-Old division.

Uno himself also had an illustrious performance career. In North America, he won Prix St. Georges and I-I classes at the Adequan Global Dressage Festival with scores above 73%. Before his importation to the USA, Uno represented Denmark at the World Young Horse Championships as a six-year-old and continued up the levels to advanced.

Uno, as he’s known at the barn, was bred by the legendary Stutteri UNO in Denmark. He passed his 35-day performance test with a total dressage score of 866 and jumping total of 709. He was licensed as a premium stallion in 2006 by the Danish Warmblood Society. At his final grading in 2007, he was awarded a breeder's silver medal and the Challenge Cup of Aage Ravn for being the best 4-year-old Danish-bred dressage breedsire.

Uno Don Diego’s sire is Dressage Royal, whose bloodlines include the popular Donnerhall x Rubinstein I cross. With excellent conformation and quality character, Dressage Royal received an 8.2 in rideability at his stallion testing and continued through the Grand Prix level.