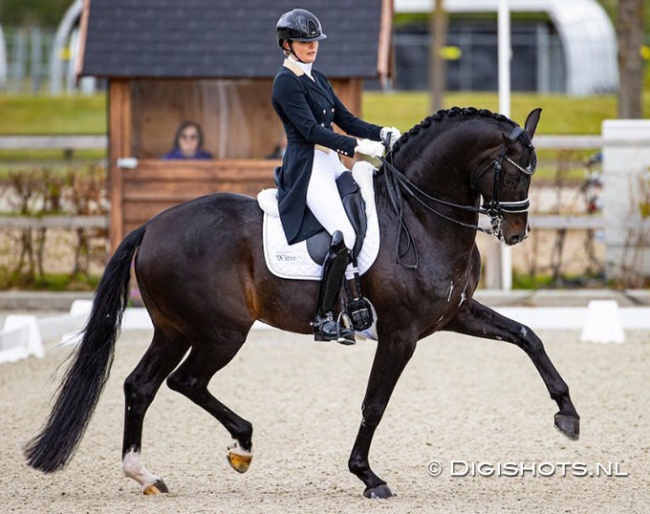 Dutch team rider Emmelie Scholtens turned her international small tour debut on rising star Indian Rock into a winning one at the 2021 CDI Exloo in The Netherlands on 5 May 2021.

Scholtens has also planned to compete her top Grand Prix horse Desperado today, but withdrew him for the second time in a row - after missing out on the CDI Hagen - as he is not fit to compete.

The 8-year old KWPN licensed stallion Indian Rock (by Apache x Vivaldi), owned by Ad Valk and Black Horses, has been trained by Scholtens from novice level to FEI.

The pair made their first big splash representing the KWPN society at the 2018 World Championships for Young Dressage Horses in Ermelo, where they finished 9th in the Finals. Since then, they have not competed at any international show.

In February the online stallion show at the 2021 KWPN Licensing showed a video of Indian Rock schooling the Grand Prix work and playing with piaffe and passage. For his competition year, Scholtens decided to expose him first to the small tour challenge.

In Exloo the pair convinced judges Jacques van Daele, Janine van Twist, and Elke Ebert of their superiority. Aside from an issue in the extended walk, the pair received high scores throughout. They posted a winning 73.922%, edging out Dutch based Briton, Charlotte Fry on Inclusive (by Everdale x Uptown), who were the runners-up with 73.333%.

"Rocky went really well," Scholtens told Eurodressage. "There still were a few small things because of inexperience, but he is so nice to ride in the test and of course an eye-catcher with his three lovely basic gaits. I'm very happy with him."

Unfortunately Scholtens had to withdraw her team ride Desperado (by Vivaldi x Havidoff) for a second time. After missing out on the CDI Hagen, the stallion was not ready for Exloo either.

On 27 February the pair had won the national squad observation trial in De Meern with 77.03%. Their last CDI start was in January 2020 at the World Cup qualifier in Amsterdam.

"I'm so bummed out about Des(perado)," Scholtens explained. "We don't really know yet how long his recovery will take and if I'll be able to ride the selection trials, but I still have hope."

The Dutch Olympic team selection trials are held at the Dutch Championships on 3 - 6 June and the CDIO Rotterdam the first week of July.