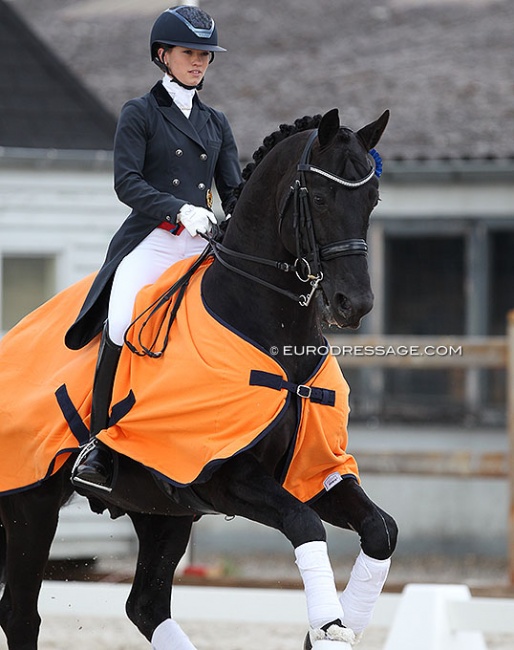 British Charlotte Fry has a secret weapon up her sleeve for the future, although the former 7-year old World Champion Glamourdale can not parade around a show grounds that incognito. One month after their international show debut at the 2021 CDI Hagen, Fry and Glamourdale showed greatness in the Grand Prix at the 2021 CDI Grote Brogel on Friday 16 May 2021.

The three-day international competition at equestrian centre Breugelhoeve in Grote Brogel, Belgium, brought an action packed programme with classes from pony level to Grand Prix. The big tour featured no less than 36 riders from 10 different countries.

Based in Den Hout, The Netherlands, British 2019 European Championship team rider Charlotte Fry had only a short drive to Belgium to give her third Grand Prix, rising star Glamourdale, some more mileage in his first year at Grand Prix level.

The 10-year old Dutch warmblood licensed stallion (by Lord Leatherdale x Negro) showed superb trot and canter extensions, a top class left half pass, though in the right one the hind quarters trailed a little bit. The extended walk had good overtrack, but the horse could march even more. The passage is elegant for such a strong, big horse, and the piaffe shows plenty of promise, but he still leans a bit on the forehand and could have more suspension. The two tempi changes were big, uphill and straight, the zig zag was super ground covering. In the one tempi changes the horse  gets a bit stuck in the changes instead of really filling the diagonal.

Fry and Glamourdale produced a wonderful test with many highlights. Overall the horse could be a bit lighter in the contact. The judges' panel, consisting of Maarten van der Heijden, Hans Voser, Francis Verbeek van Rooij, Isabelle Judet, and Olivier Smeets, placed the pair first unanimously with 76.761%. The individual marks ranged from 75.000% to 78.478%.

No Tokyo, but Maybe Hagen For Glamourdale

The 25-year old Fry now has three horses in the running for British Team selection for the 2021 Olympic Games in Tokyo and 2021 European Championships in Hagen.

In the Grand Prix, Fry has been scoring 76% on all three horses, with Everdale producing the highest Grand Prix score so far at the 2021 CDI Exloo (76.848%).

Owner Gert-Jan van Olst has decided that Lottie will focus Dark Legend and Everdale on the Tokyo and keep the younger Glamourdale potentially for the Europeans in Hagen. With this decision, Glamourdale will not have to stop breeding and can continue to service mares this spring and summer.

Owned by Charlotte Jorst in partnership with Helgstrand Dressage, the pretty chestnut has been absent from the international arena for a full four years. His last appearance was at the 2017 CDI-W Amsterdam, where Severo Jurado Lopez and his 2016 Rio Olympic ride were eliminated. Shortly afterwards Lorenzo sold to American Charlotte Jorst but she never got to compete him. A hoof injury sidelined the horse for all those years.

But now he's back. Under Hogberg the sympathetic chestnut appeared fresh and fit and showed many beautiful things, but his conformation will continue to challenge him his entire sport career. The horse showed lovely trot extensions, good crossing and balance in the trot half passes and a very nice rein back. Also the extended trot was lovely, the the zig zag well ridden and the pirouettes were very nice with good collection. In the piaffe he is soft footed but leans on the shoulders. The big problem point is the passage. The long backed chestnut fails to truly step under, goes incredibly wide behind and swings in the hind quarters. He also halts with stretched, wide hindlegs. His ride hindleg consistently steps out from under the body on the next track, proving that he does not really carry himself. Overall it was still a more than pleasing test and the tall horse has a very soft-footed way of going.

A large group of Dutch Grand Prix riders came to Belgium to compete in the big tour.

Former Dutch team rider Madeleine Witte-Vrees brought both her horses, routinier Cennin (by Vivaldi x Donnerhall) and her new rising star Finnlanderin, an 11-year old Oldenburg mare by Fidertanz x Donnerhall.  Aboard the latter, Witte-Vrees placed third in the Grand Prix with 71.065%. The liver chestnut mare, who was previously owned by Frenchman Xavier Marie, competed in her first international at the highest level. She showed good trot extensions, big crossing in the half passes, a good rein back. She is light footed and energetc in the passage. Her extended walk could cover more ground although the rhythm stayed clear.  The piaffe is problematic though. The mare pushes the hindlegs out instead of sliding them under the body and she looks sour and unhappy in the movement. The two tempi changes could be even straighter in the hindquarters. The ones are better but lack some uphill tendency. Finnlanderin obediently executed all movements, but could look a bit more happy in the collected work which still comes across as a big effort at the moment. They scored 72.152% for third place.

Patrick van der Meer steered the Kruininger family's 14-year old KWPN stallion Chinook (by Vivaldi x Havidoff) to a fourth place on 71.065%.  Chinook showed good lengthening of the steps in the trot extensions. The half passes were ground covering, but there could be more core stability and self carriage in them. The extended walk had plenty of overstep but the striding could have been more supple through the back. The collected walk was clear in the rhythm. He nicely lowered the haunches in piaffe but still hasn't got the right balance and creeps a bit forward very busy with his mouth and lips. The passage showed nice lift in the forehand, but like with many Vivaldi offspring they struggle to carry themselves from behind with collection and strength. The  tempi changes were nice and big but not so straight. The zig zag was very nice and the pirouettes small.

Belgians on the Move

Nine Belgian combinations competed in the Grand Prix on home turf. The best scorer in the class was the Paris based Laurence Vanommeslaghe on the 12-year old KWPN gelding Edison (by Johnson x Balzflug).

Edison might be one of the most talented Grand Prix horses in Belgium at the moment, but the partnership with Vanommeslaghe is still quite new and the two are still searching for more lightness in the contact and fine-tuning. The dark bay gelding has buckets of talent in the piaffe and passage, can really sit, does good tempi changes and pirouettes, but it all needs to look more effortless and flowing. They scored 70.935% for fifth place 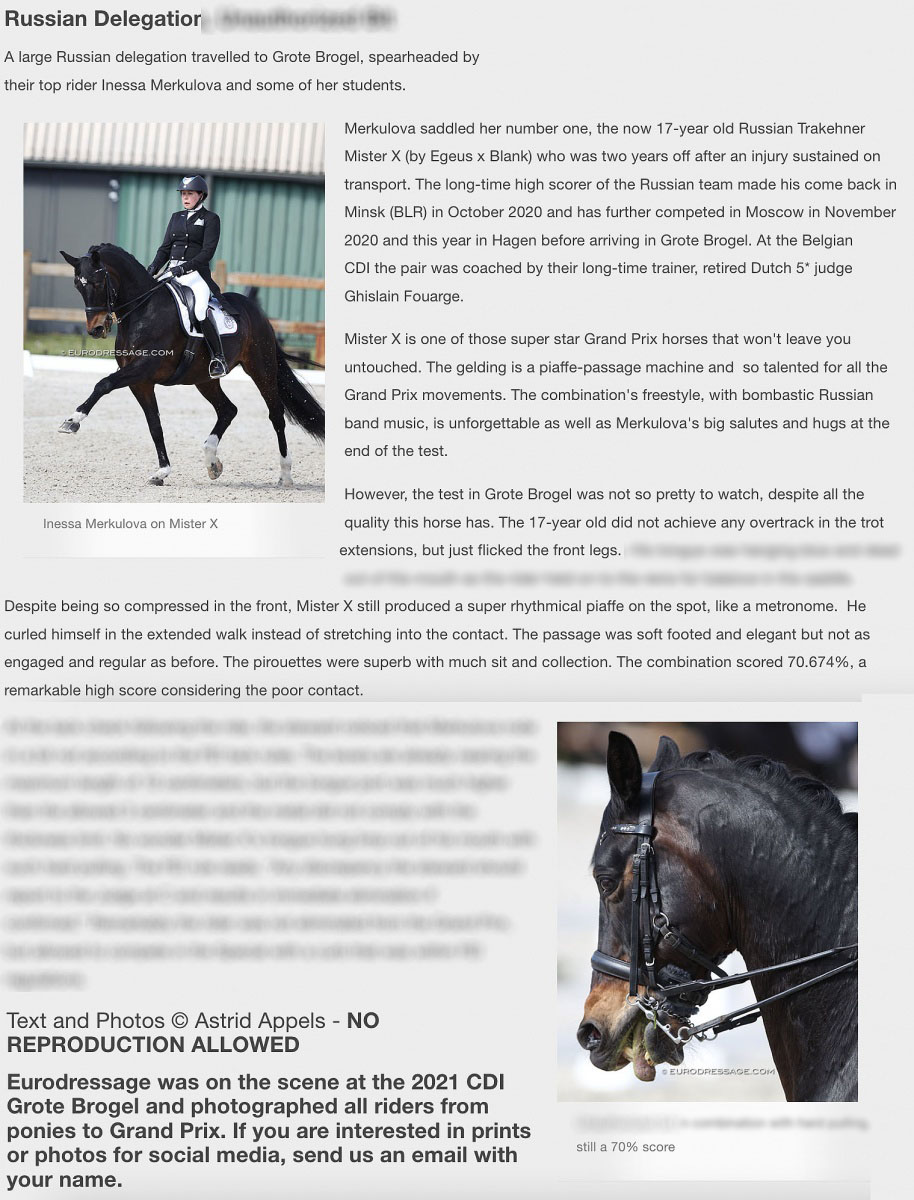 Eurodressage was on the scene at the 2021 CDI Grote Brogel and photographed all riders from ponies to Grand Prix. If you are interested in prints or photos for social media, send us an email with your name.