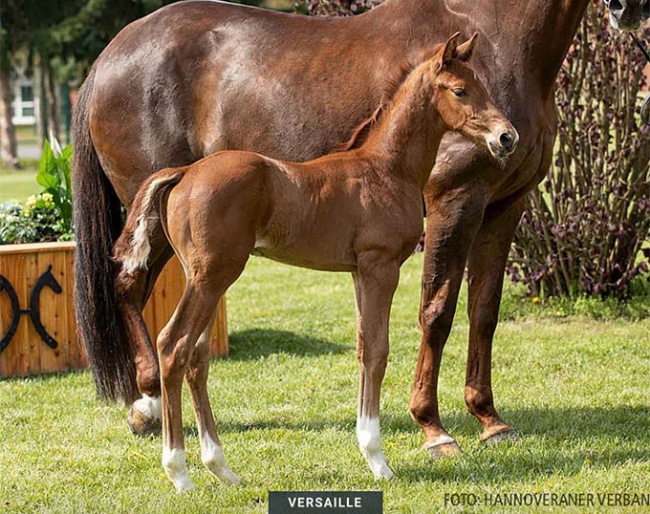 After an exciting bid up, the Vitalis son Versaille sold to Spain for 40,500 euro, the top price of the 2021 Hanoverian May Online Foal Auction which concluded on 20 May 2021.

The Hanoverian society is hosting a series of Verden Foal Spring auctions in a two week rhythm. The next online foal auctions with approx. 20 foals each are: 31 May to 3 June, 14 to 17 June and 28 June to 1 July.

Versaille is by Vitalis out of state premium mare Delilah (by Don Romantic x Dancier). He is bred by Gerda Stein. Nine clients bid on him 45 times, but in the end he sold to Spain for 40,500 euro after a bidding duel against a regular from Denmark.

This little dark chestnut is already the second offspring of Hann.Pr.St. Delilah, who found a new owner in Verden at a top price. His full sister Vanellope was sold almost exactly three years ago for 62,000 Euros.

The stallion rearer from Denmark still found what he was looking for in the high-quality collection and achieved the second son of Vitalis, Vis A Vis (breeder and exhibitor: Sabine and Jan Feuerbach, Dornum). As the last offer of the evening, the chestnut was sold for 28,000 euro.

The best paid foal with a jumping pedigree was Coeur de Cornet (by Cornet Obolensky x Tlaloc la Silla), bred by Dr. Rowold, Haselünne). The bay was worth 12,500 euro to a breeder from Lower Saxony. Only a few days before, her full brother, the former Verden auction horse Cornet XL, qualified for the Bundeschampionat for five-year-old show jumpers.

Apart from Versaille, twelve of the 25 foals will leave Germany.

The third most expensive foal was Sir Beverly Hills (by Secret x Christ), who sold to a German for 24,000 euro.

Joining the top seller in Spain is  the filly Gilette (by Global Player x Sandro Hit) for 9,750 euro.

The average price of 11,100 Euros is the highest of the three completed auctions of the Verden Foal Spring so far.