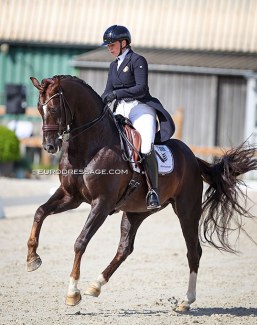 Just three weeks after achieving her second MER score and official qualification for the 2021 Olympic Games, Norway's Ellen Birgitte Farbrot has announced she will not be competing in Tokyo.

Norway has been allocated one individual slot as part of the 15 individual places that have been assigned based on the Olympic Ranking List of 2019. In Group A (North Western Europe), Finland with Henri Ruoste as flagbearer and Norway thanks to Fabrot's scores obtained a slot.

However this year the Danish based Norwegian achieved achieved her two MER scores aboard the 16-year old Oldenburg bred Tailormade Red Rebel (by Skovens Rafael x Donnerhall x Pik Bube I) and qualified for Tokyo with him.

Today, Farbrot announced that she will not be travelling to Tokyo with the 16-year old Red Rebel.

"In consultation with the owners of Tailormade Red Rebel, we have chosen to withdraw from the Olympic spot," said Ellen Birgitte. "Based on the fact that Tailormade Red Rebel is still new to this level and both COVID and EHV made it close to impossible to give him the show and travel experience needed. With that said my “athlete heart” wants us to go, also knowing it might never happen again. If the travel was not that far - it would have been a different story."

She continued, "I’m still extremely happy that the qualifications went well and I’m so happy for all your support. Hopefully we can look forward to the European Championships and the World Championships next year. I’m delighted to learn that my withdrawal makes an opportunity for another country to send one of their candidates.  Sometimes the journey is the destination."