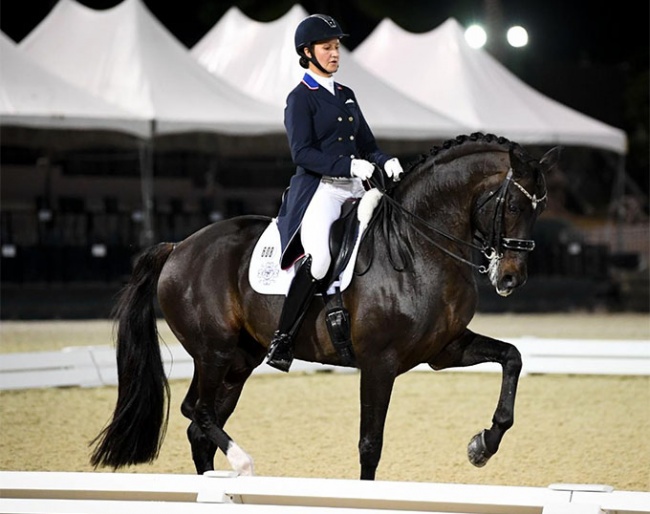 The competition was hosted late in the evening and under the lights at PBIEC to simulate an environment similar to what is expected in Tokyo later this summer during the Games. The climate in Wellington, Fla. is comparable to the weather and heat predictions for Tokyo in late July and early August.

Adrienne Lyle (Wellington, Fla.) and Salvino secured the highest score of the evening, recording an 82.413% in the FEI Grand Prix Test from the judging panel. Lyle and Salvino, a 14-year-old Hanoverian stallion owned by Betsy Juliano LLC, competed lightly this spring in anticipation of a final summer campaign ahead of team selection and delivered with an impressive score.

“I was absolutely thrilled with him. He makes me tear up and I have no words for him. Every time he is more amazing than the time before. This was a great test for us under the lights,” commented Lyle as she discussed her ride aboard Salvino. “I don’t think I’ve done more than one night class with him, so he was fresh and a little excited, which is great because I can channel all of that energy, but I’m really glad we were able to have this opportunity. He feels great, and we’re just going to try and preserve tomorrow, just tack walk and recover, and then try to put in a repeat performance on Friday night.”

Schut-Kery and Petters in Top Three

Sabine Schut-Kery (Napa, Calif.) and Sanceo, a 15-year-old Hanoverian stallion owned by Alice Womble, also achieved a career high score of 78.978% to finish in the top three on the leaderboard, nearly hitting their goal of breaking the 80 percent mark in the FEI Grand Prix Test.

“My plan is to always stay true to my training, but obviously show him off, too, to reach maximum scores, but he’s a stallion and when he’s new to a venue he can be quite tense, so I just told myself to stick with what I would do at home and it clearly paid off tonight. I just have to hold myself to it and trust it because I can always add that little extra bit that I want in the ring, but I also want it to come from an honest place,” explained Schut-Kery about her approach to training and competition with Sanceo. “I’ve been told that there are potential 80 percent scores in there for us, and I believe that, and I believe in him, and that is one of my goals this week.”

Wagman and Lagoy Seem to Vie for Reserve Spot

Nick Wagman (San Diego, Calif.) and Don John, a 13-year-old Dutch Warmblood gelding, owned by Beverly Gepfer, finished the first night of competition with a personal best score of 75.652%, ahead of Olivia LaGoy-Weltz (Haymarket, Va.) and Rassing’s Lonoir, a 17-year-old Danish Warmblood gelding, owned by LaGoy-Weltz and Mary McPhail, who rounded out the top five scores with a 75.131%.

Competition at the U.S. Dressage Mandatory Observation Event will continue on Friday, June 11, with the Grand Prix Special Test, beginning at 8:15 p.m.