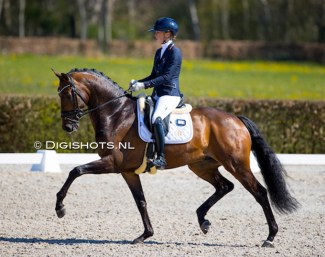 Dutch young horse rider Kirsten Brouwer will not appear in the second Dutch selection trial for the 2021 World Young Horse Championships. She is recovering from an injury.

A few weeks ago she injured herself in a stable accident.

"it was super stupid, but a horse dragged me and I simply twisted my ankle severely," Kirsten told Eurodressgae."The ligaments were torn and a muscle. But fortunately I'm back in the saddle. It's nothing serious, but just very inconvenient."

Brouwer qualified two 5-year olds - Lightning Star Rr (by Ferguson) and Lennoxwaard (by El Capone) - for the second Dutch team selection trial to be held on 21 - 22 June in Ermelo.

"I'm still not 100% but it's getting much better," she further stated. "So I will not compete in the selection for the World Championships for the young horses coming Monday. The next selection in July I'll be there again."

She has been excused and can ride her two horses in the third and final trial on 19 - 20 July.