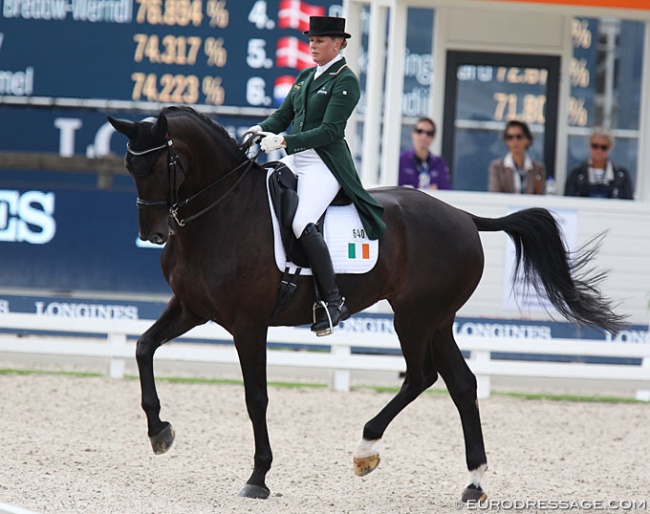 Despite having achieved a historic, first ever team spot for Ireland at the Olympic Games, Horse Sport Ireland has decided not to send a team to Tokyo.

HSI Dressage High Performance Director (HPD) Johann Hinnemann has taken the decision not to nominate a Dressage team to OFI for the Tokyo Olympics. This decision was taken as several key members of the Irish team that had qualified for the Games are unfortunately no longer available for selection due to a combination of horse retirement, veterinary and medical reasons.

Judy Reynolds’ 19-year Vancouver K has been retired from sport, Kate Dwyer is pregnant and Anna Merveldt’s Esporim is not fit to compete.

Nevertheless Ireland still had a further three combinations that had achieved the MER scores and could make a new Irish team: Heike Holstein, Dane Rawlins and James Connor.

However, Ireland’s Dressage High Performance Director, Johann Hinnemann (“the HPD”) reviewed his Olympic Nominations Policy for Dressage as against the combinations available. Director Hinnemann advised the Board that two combinations have not met the specific criteria as set by the HPD, and as such, the HPD is not in a position to nominate these combinations.

The resulting consequence being a team of three athlete/horse combinations cannot be fulfilled.

No Irish to Tokyo

The Board of Horse Sport Ireland has decided, following careful deliberation, to accept the technical guidance of the HPD and formally withdraw the IRL Dressage Team quota allocation with the National Olympic Federation, and our international federation, the FEI. This difficult decision was founded on rational performance considerations and an informed technical position of our retained Dressage expert Johann Hinnemann.

Horse Sport Ireland understands that the IRL qualified combinations will be eligible pursuant to the reallocation of individual quota places, and that one individual Olympic quota place may be offered to IRL.

“Such a shame,” Irish team spot contender Dane Rawlins told Eurodressage. “It’s sad that we lost most of our leading contenders but I believe the Olympics are as much about representation to promote the sport and encourage others. I have never believed that not partaking is a viable option.”

Related Links
The End of the Long Chase for Tokyo Places: Team and Individual Spots Known
Eurodressage Coverage of the 2021 Olympic Games