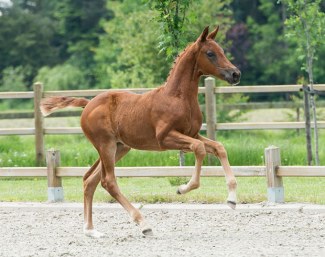 Renommée de Baian became the best seller of the 2021 Global Dressage Auction, which concluded on 22 June 2021.

The chestnut filly by Bordeaux x Jazz sold for 15,000 euro. She is out of the full sister of Olympic medal winner Parzival. She will stay in The Netherlands.

The Global Dressage Auction had a world's first with two frozen embryos for sale that had been sexed. The gender of the foal has been genetically determined during the artificial ET process.

One future mare and one future stallion by Blue Hors Zackerey out of the full sister of elite stallion Johnson were auctioned.

The foals in this Global Dressage Auction sold for an average price of 13,500 euro.

“We look back with satisfaction on this second auction of this year in which we offered foals for the first time. The foals are sold for good, realistic prices. The international interest offers a lot of perspective for the future. We have succeeded in presenting an exceptional collection," said Poppelaars.  The next auction will be in October.