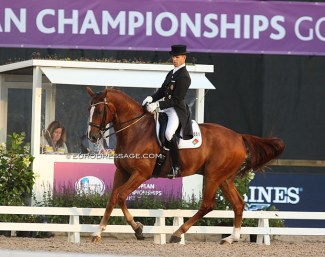 The former Portuguese team horse Sai Baba Plus has been sold to the U.S.A. The 14-year old Hanoverian gelding represented Portugal at the 2017 European Dressage Championships.

Sai Baba Plus is by Sir Donnerhall out of Daylight (by De Niro x Warkant). He is bred by Robert Gaus. He was owned by the German based Portuguese rider Boaventura Freire and the Plus suffix indicates the horse's ownership.

The liver chestnut gelding made its international show debut as a 5-year old in the young horse classes at the 2012 CDI Vejer de la Frontera, where it won four classes in a row. In 2013 he competed in the 6-year old tests at the CDI Ponte de Lima.

Three years later the horse made its international Grand Prix debut at the 2016 CDI Compiegne and competed internationally once more than year in Frankfurt.

Sai Baba's highlight year in his career was 2017, when he did the CDI's in Neumunster, Dortmund, Mariakalnok, Hamburg and Achleiten to be nominated on the Portuguese team for the 2017 European Championships in Gothenburg, where they finished 35th in the Grand Prix with 67.214%

In 2018 the duo tried for the WEG team and showed in Zakrzow, Hamburg, and Fritzens but were not selected. In 2019 they aimed for the Europeans once more raking in scores in Zakrzow, Hagen, Hamburg and Leudelange but the level of Portuguese dressage had risen spectacularly over the years and they didn't make the cut. The 2019 CDI Leudelange was also Freire's last international. The pair's last competition was a regional show in Schenefeld in October 2020.

Sai Baba Plus has been sold to American Heidi Humphries and the ride has been given to Kati Daggi, who has nicknamed the horse "Rolex". They are trained by rider, trainer and horse dealer Endel Ots, who earlier in the year, found the KWPN approved stallion, King’s Pleasure (Dark Pleasure x Johnson) for Humphries to buy.